While bumbling around my apartment this morning, mentally outlining the tasks to be done today over a rather tasty piece of challah french toast, I noticed that the “record” light on my cable box was illuminated. “That’s strange,” I thought, “I don’t remember programming anything today.” I turned on the TV and immediately knew what I was looking at–a woman with an unmistakable baby face with a slight overbite, devilish, playful eyes, and slender, catlike figure was pleading with a Chinese general for the life of a slave woman. “Oh!” I thought, “It’s The Bitter Tea of General Yen!” My trusty DVR had remembered what I had not–there was a Barbara Stanwyck movie on today. 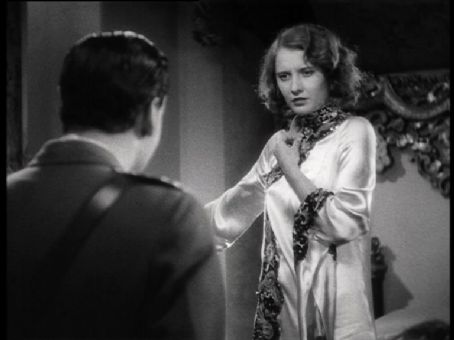 Barbara Stanwyck is a unique personality in the film world. Known as “the best actress never to have won an Oscar,” she was lauded for her versatility and skill in everything from suspenseful murder plots (Double Indemnity) to zany screwball comedies (Ball of Fire), and everything in between. But through it all, Barbara Stanwyck never stopped being Barbara Stanwyck, and it is this tough and gritty dame from Brooklyn that permeated all her roles, causing audiences to fall in love with her and flock to her movies.

The combination of New York sass and unusual beauty set Barbara Stanwyck apart, and though she lacked the flawless loveliness of Gene Tierney or Lana Turner, she exuded a confident and dominating presence that belied a childhood filled with trauma and abandonment. Instead of letting her childhood make her a victim, the former Ruby Stevens was strengthened by it, incorporating those lessons she learned as a child into her adult persona as an actress.

Orphaned at the age of 4, Stanwyck (known by her birth name of Ruby Stevens until she began her acting career) grew up on the streets of Brooklyn, cared for by an older sister and intermittent foster parents, but the majority of her life was spent on the street, where she learned to fight, curse like a sailor, and otherwise defend herself physically and verbally. She left school at the age of 14 and got a series of odd jobs which eventually led to a place in the chorus of a play called The Noose. Following the success of that production, she was cast in Burlesque, which made her a Broadway star and caught the attention of Bob Kane, who urged her to come to Hollywood for a screen test. From there she gradually rose to fame until she was one of the most highly sought-after stars of the 1930’s and 1940’s, with earlier films like Night Nurse (1931), Baby Face (1933) and Stella Dallas (1937) paving the way for such 1940’s classics like The Lady Eve (1941), Ball of Fire (1941) and Double Indemnity (1948).

Her personal life was rocky at best–her marriage to Frank Fay broke up due to alleged domestic violence, and Stanwyck won custody of their adopted son Tony. She then married actor Robert Taylor, with whom she stayed for 14 years before their their divorce in 1950. Tony became increasingly troubled, and Barbara, having been raised without parents of her own, had problems knowing what to do with him. Eventually the two became estranged, and stayed that way until Barbara’s death in 1990.

When the popularity of television became apparent, Stanwyck made an easy transition to the world of the small screen, appearing in a prominent role as Victoria Barkley in “The Big Valley” which aired for 4 seasons from 1965-1969. In this role, she was able to show off the versatility she displayed as a movie actress, and made it clear that 20 years past her prime, she still had it.

Stanwyck had many friends in Hollywood, and had an especially close friendship with William Holden. Holden had paid an unexpected tribute to Stanwyck in 1978 when they were onstage together presenting an Oscar for Best Sound, crediting her with saving his career when it was in jeopardy. In return, when Stanwyck won an honorary Oscar at the Academy Awards ceremony in 1982, she dedicated the award to Holden in a rare display of emotion, reminding us that this tough, brassy character was wonderfully, beautifully human.

Following smoke inhalation on the set of The Thorn Birds, Stanwyck developed a severe case of bronchitis that soon turned to chronic obstructive pulmonary disease (COPD). The prognosis was not helped by the fact that Barbara had been a smoker since age 9, and she died on January 20, 1990, of a combination of COPD and heart failure. Her ashes were scattered in Lone Pine, CA.

Today, Barbara Stanwyck’s memory is very much alive, and she is familiar to many younger television viewers today due to the reruns of “The Big Valley” that run every day on the TV station INSP. She has become a legend in the community of the young classic film enthusiasts, with those of all genders and persuasions proclaiming their love for her. Turner Classic Movies is very much aware of Barbara Stanwyck’s popularity, and due to this demand, she is slated to be the Star of the Month for the month of December. Every Wednesday, she will be honored with the best films of hers in the prime time slot continuing on into the night.

Barbara would be absolutely thrilled. Not bad for an orphan from the streets of Brooklyn.

3 responses to “A Stanwyck Sunday”