A scene filmed in double exposure in “Sunrise.”

A foreseeably grim story about a man intent on killing his wife in order to live with a seductress gradually fades into a simple, beautiful, heartwarming tale of devotion and love, in this 1927 silent masterpiece by F.W. Murnau. Starring Janet Gaynor and George O’Brien, Sunrise (the full title is Sunrise: A Story of Two Humans, but it is most often referred to as simply Sunrise) is considered to be one of the best silent films ever made, and like the seminal film The Jazz Singer, released later the same year, it incorporated a wide variety of synchronized sounds occurring throughout the movie. We hear car horns, the squeal of a pig, even human voices in the sounds emanating from a large crowd. To audiences in 1927, this was a real spectacle.

Following the release of The Jazz Singer, movie studios were faced with the reality that the future of silent pictures would be extremely short. Though silents did not disappear overnight, they began to slowly fade until 1929, when silent cinema all but became extinct. Sunrise, though released 2 weeks before The Jazz Singer,seems to bridge the gap between the great silent films and the beginning of great sound films, incorporating truly the best of both worlds–the fading silents and the rising talkies.

In addition to the film’s use of audio, it also utilizes magnificent cinematographic techniques that enhance all of the emotions involved in the story. A rather odd font choice is used for the intertitles, suggesting a scary story to come with its large, uneven, drippy type. However, the intertitles are used very sparingly, and Murnau relies most heavily on the environment and the actors’ faces to tell the story. The use of double exposures, cross-fades, and skillful cuts transports us from one mindset to another–from hating the husband as he is about to kill his wife, to sympathy for him in his guilt in ever wanting to commit such a crime. It also brings worlds together–in the opening shots, in which it is shown through a superimposed intertitle that this is “Summertime, vacationtime,” we are taken from a bustling train station in the city to a shot of vacationers sunning themselves on a beach, to a shot of people boating on a tranquil lake in a serene countryside. Each is clear in its emotional intent, and the scenes work together in harmony to create a lovely wholeness to the feeling of summertime.

The temptress and the man, with the beckoning of the city apparent with the city party scene looming over their heads.

The temptress, who urges the man to kill his wife, is shown in a beautiful double-exposure shot almost as a demon inside his head. She appears and disappears like a specter, and he is possessed by her power. At the end, when all is well with the man and his wife, Murnau creates the opposite image–she returns to the city on the back of a cart, dejected, with her head down, the defeated warrior for a man’s affections. The image is powerful, and I, as a rather oversensitive human being, felt bad for her.

Janet Gaynor, as the wife, is truly stunning in this role. Playing a beautiful innocence and naïveté, but with a soul you can feel, she inhabits the character and you feel that under that innocence lives a strong woman. Her performance earned her the Academy Award for Best Actress of 1927/28, in the very first Academy Awards ceremony in 1929. It was one of three films that earned her the award, due to the nature of the Academy Awards for the first three years of its existence, and in addition to Sunrise she won for her performances in Seventh Heaven and Street Angel.

The title is interestingly symbolic–though at the outset, it may be read as simply the timing of the last shot of the film, it also symbolizes the rise of a new understanding and relationship between the husband and wife. The beginning of the film is bleak and dark for both of them, as the husband is intent on a life with his mistress. When he realizes how much he loves his wife, this is the beginning of their own personal sunrise. The majority of the film leads up to this moment, where the physical sunrise in the sky meets with their personal sunrise as a couple. Given the progressive nature of this work, it is also, in a way, ironic that the film is called Sunrise–as coming on the heels of both The Jazz Singer and the rise of talkies, it heralds the dawn of a new era in filmmaking. 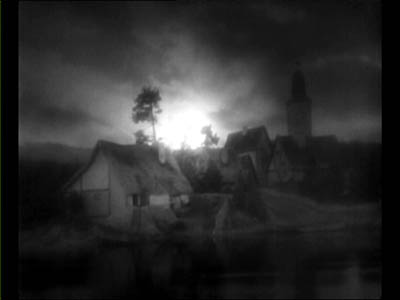 The final shot of the sun coming up over the house of the man and his wife.