I realized that I never officially posted our most recent accolades! Well, without any further ado…

…AND Best Blog Event, for the Dueling Divas Blogathon I hosted on this site last December. 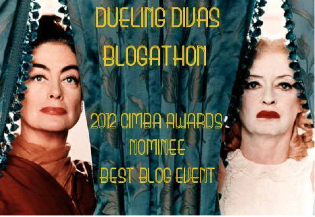 (By the way, stay tuned over the next few weeks for an important announcement regarding this year’s Dueling Divas Blogathon! Yes, it’s happening again!)

It was an honor to be nominated among several other extremely high quality blogs–the Classic Movie Blog Association holds a very high standard to be met, and never is it more evident than in their yearly awards. To my great shock and humility, I had the privilege of winning a CiMBA Award last year for my discussion of the final scene of The Heiress, and when I found out that I had been nominated again this year in 2 categories, I was thrilled.

I must say I am rather proud of Backlots’ blog design. It took me a good bit of time to create the banner, as WordPress is strict about the size limits that must be respected, and I cut, copied, pasted and screenshot for a good half an hour to create the banner as it looks today. It is the same image that now appears on Backlots’ business card, and I get many compliments on how nice it looks when I hand out my card so I’m very happy that it got some formal recognition!

I was excited about the prospect of a Dueling Divas blogathon. I wanted to make it unique and appealing to a wide audience–ranging from Bette and Joan to Judy and Grace to Hayley Mills and Hayley Mills, and the posts that came in reflected that diversity that I tried to impart from the beginning. I hoped it would be enjoyable, I certainly enjoyed it and it’s nice to hear others felt the same way. 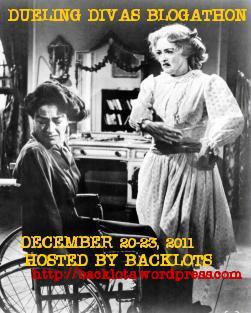 As I mentioned earlier, stay tuned, because those Dueling Divas will be back at it this December and this time–there will be a twist!

Thank you to the CMBA, and thank you to my readers for encouraging me in this blogging adventure. I couldn’t be happier, and I’m humbled just to be in the same league as some of these blogs.

Congratulations and good luck to all the nominees!