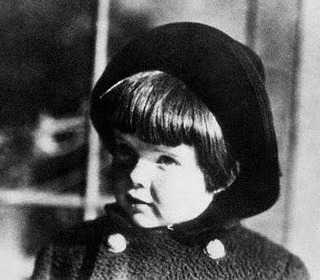 Katharine Hepburn as a small child in Connecticut.

Though she often preferred November 7, in honor of her late brother Tom, May 12 marks the birthday of the most legendary actress ever to perform onscreen. It sounds like a ridiculous superlative to say “the most…” anything subjective, but in this case, it is justified, as I think we can all agree that Katharine Hepburn is unequaled in her star power. The quality of her work can be debated, the extent of her talent can be questioned, but at the end of the day, nobody ever disrespects Katharine Hepburn.

In October of 1973, Hepburn appeared in a rare interview session with Dick Cavett. She decided, during the tech rehearsal, that she didn’t like the set, and proceeded to essentially direct the workers in their jobs. She critiqued everything from the carpet to the table, and started to move furniture around to suit her preferences. She was doing things that were unorthodox, controlling, and straight-out against union rules–yet nobody stopped her. Every person on the set gives her the utmost respect, they are putty in her hands. They knew that they were dealing with a legend of the highest caliber. Take a look:

How does one achieve this kind of power? What are the factors involved in making a legend? So many tried and failed to earn this kind of respect, to have such an illustrious career that others literally grovel at your feet. So many of that era lost themselves in drugs or alcohol, and met a premature demise. What did Katharine Hepburn do? How is she different?

Bette Davis, in an interview about her own longevity without the problems ailing so much of Hollywood, probably summed it up best:

It takes great discipline…and I think I was very fortunate in my upbringing. I think my New England background, for the work I went into, was an extraordinary stabilizer….I was also an extremely healthy person…I was enthusiastic, loved my work, and in that area I had no problems. No reason to escape into dope or pills.”

Katharine Hepburn was intensely proud of her New England heritage, and often cited it as a defining force in her life and identity. Bred from pure Connecticut Yankee stock, Hepburn was raised to be self-assured, assertive, and confident in herself and her abilities.

Hepburn was born May 12, 1907, the second child of parents Thomas Norval Hepburn, a prominent urologist, and Katharine Martha Houghton Hepburn, who advocated for women’s rights and was one of the founders of Planned Parenthood. Her family’s progressive views both empowered and alienated her–dinner table discussions were often focused on controversial issues of the day, abortions, venereal disease, or her father’s work in the field of urology. Neighbor children were often asked not to play with the Hepburns, for fear of unwanted influence, yet these discussions set the basis for Kate’s lifelong reputation for outspokenness, and spurred a political activism in her earned enormous respect from the Democratic contingent of Hollywood. She actively campaigned for Roosevelt and remained a supporter throughout his run as president, and spoke out vehemently against the anti-Communist witch hunts that occurred under McCarthy in the 1950’s. Her political efforts directly reflected her mother’s, who was herself an impassioned speaker at many women’s rights rallies and would often take Kate, as a toddler, to listen to the speeches given at conventions and protests.

Katharine Martha Houghton Hepburn, who shared a passion for politics as well as an uncanny physical resemblance with her daughter.

The Hepburns had 6 children–Tom, Kate, Marion, Dick, Bob, and Peg. They were raised strictly despite their parents’ liberal views, and yet were all-around happy children. Kate shared a special bond with her older brother Tom, who was a doting and loving caretaker to his sister. Kate’s world was turned upside down when she found Tom hanging in the attic of a friend’s house while they were visiting, and she never fully recovered from the shock. She said that after Tom’s death, she began to feel “ingrown, sort of like a toenail can get when the shoe is too small.”

I pledged to Tom and myself that he would live in my heart and mind as long as I lived. I decided I had to live my life for two… The real date of his death would not be until the day I died.

According to biographer Charlotte Chandler, following the death of her brother, Hepburn began taking on boyish clothes and cut her hair short. The death of her brother, in combination with her family’s progressive attitude toward women, most likely solidified Hepburn’s legendary fashion sense and influence on the clothes of her day. She singlehandedly popularized pants for women, and her lithe, tomboyish figure became the envy of women in lieu of the often voluptuous figures of women in 1920’s cinema.

As an actress, Hepburn brought stunning realism to her characters–be they the ditsy Susan Vance from Bringing Up Baby, or the stoic mother coming to terms with her daughter’s interracial marriage in Guess Who’s Coming to Dinner? Her versatility was legendary, and she truly played every genre, excepting the horror movie phase that so many actors succumbed to when their careers started to falter. She always preserved her dignity when it came to roles, and she made stellar career choices, ensuring her extraordinary longevity as an actress. I think we only have to lament the fact that she never played Shakespeare onscreen. Her theatre career began at Bryn Mawr college, known for producing forward-thinking, progressive women, and the alma mater of her mother. Had Hepburn’s confidence and self-assurance not already been cemented in her from a young age Bryn Mawr definitely would have done the trick. Hepburn was destined to be a leading woman both in her life and her career.

Hepburn’s success as an actress and a cultural icon is undoubtedly due to her upbringing in New England and the circumstances of her life therein. We certainly have this upbringing to thank for many of the classic films we enjoy today–because Katharine Hepburn certainly would not have been the Katharine Hepburn we know and love today without the influence of her early life.

Here is a picture of Kate and her brother Tom as children. Thanks for reading!