It’s here, readers! Backlots’ annual coverage of the San Francisco Silent Film Festival starts tonight. As usual, I will be enabling live tweets on the blog, and posting every evening about the day’s adventures.

For more information about what is going on this weekend, please visit the San Francisco Silent Film Festival website at http://www.silentfilm.org. There, you can buy tickets, find the full schedule, and get the lowdown on what the Silent Film Festival does year-round. It is a wonderful organization dedicated to the preservation of our silent film heritage, and it partners in many restorations and rare screenings of silent classics. Check them out! 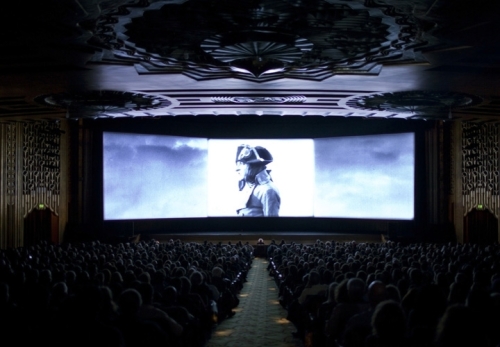 In 2012, the San Francisco Silent Film Festival screened Kevin Brownlow’s masterpiece restoration of Abel Gance’s NAPOLEON at the Paramount Theatre in Oakland. Over the course of 4 days, 10,000 people packed the theater.

If you are in the Bay Area, I encourage you come to at least one screening. You won’t regret it. My mother, who previously knew little to nothing about silent film, came with me several years ago to the festival’s screening of Wings with live foley accompaniment. She was blown away, and couldn’t stop talking about it. Since then, she has come with me to multiple screenings at the festival every year, and has become a bona fide silent film fan. This is what the Silent Film Festival strives to do–to create new interest in silent film and delight longtime devotees–and it succeeds beautifully.

So if you’re in the Bay Area, I hope to see you there. If you are not, follow along on the blog and on Twitter. It will be a great time! 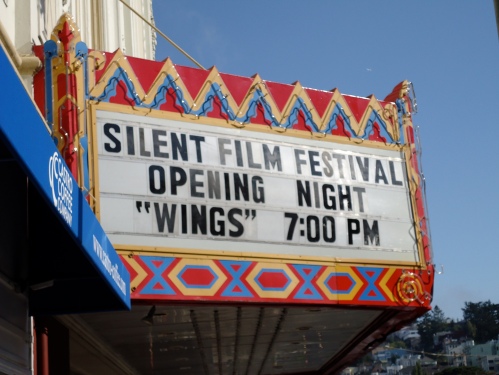 Well readers, the day has finally come! I have been anticipating this festival for many months, and July 12 has always seemed like an eternity away. But tonight, I arrived at the Castro at 6:00, and the evening began! I encountered Marya of YAM Magazine along the way along with fellow blogger Phil at Phil’s Film Adventures, and we schmoozed about movies, festivals and such until it was time to go in.

On the screen upon entrance was a long montage of pictures celebrating the festival, Wings, and the 100th anniversary of Paramount Pictures. Most of the images were focused on Clara Bow (the star of Wings), but there were a number of other films represented through photos and lobby cards–notably a colorful, eye-catching lobby card of The Spanish Dancer, to be shown later at the festival. Interspersed between the photos were sponsors’ ads, as well as  bits of trivia about Clara Bow, Wings, and Paramount Pictures. Here are some of the bits that I found particularly interesting:

Before the film, the president of the board of the San Francisco Silent Film Festival came up to speak about the theme of the festival this year–the 100th anniversary of Paramount Pictures. He gave a brief history of the company, beginning with its foundation as the Famous Players Lasky studio, to its eventual merger with W. Hutchinson to become Paramount Pictures. It turns out that Paramount Pictures was founded on July 12, 2012–precisely 100 years to the day of the start of this festival. He also introduced the orchestra that would be performing live accompaniment, the MonAlto Motion Picture Orchestra, and also a team of foley directors that would be providing a creative touch to the film–adding a layer of foley sound that would complement the music and the action onscreen. The largest bulk of the foley set was a gigantic bicycle that was used to make airplane sounds during the aviation scenes–the foley artist would spin the bicycle wheel and run a strip of cardboard across the rubber to make a whooshing noise such as fighter airplanes do in the sky. It was remarkably well done, and a fantastic idea.

The bicycles used for sound effects.

Next to speak was William Wellman, Jr., the son of director William Wellman. He gave some insight into the making of the film, and how his father was chosen as director. B.P. Schulberg, the assistant producer at Paramount, advised the studio to choose Wellman because he believed that only an experienced fighter pilot could do justice to such a story. Wellman was a decorated army veteran, and upon being chosen to direct the film, he not only produced one of the most monumental aviation pictures ever made, but he invented the technology that paved the way for all the rest. Nothing like this had ever been done before, and in my opinion, nothing like it has really been done since.

Wings is a movie that stands the test of time in many ways. A gripping account of the lives of soldiers during World War I, it is at different points suspenseful, sad, sweet, and funny, and the movie works all the emotions with great aplomb. It also tells the story of mistaken and forsaken love, and above all, the importance of deep friendship. It could easily have been made today, as the story is timeless  and classic and the technology extremely advanced. There are many scenes that are very affecting, and certain points nearly brought me to tears. It is truly an epic film in every sense of the word.

After the movie was over, there was an opening night party, but as I had to get back home to write this post, I couldn’t stay. It was already very late by the time the movie got out, and though I would have loved to have stayed, I had to think about this post and about getting up early for the festival lineup tomorrow.

A Sneak Peek at the San Francisco Silent Film Festival

Well readers, I am back, bright-eyed and bushy-tailed from my cello master class, and ready to tackle Backlots’ next big event, which is my coverage of the renowned San Francisco Silent Film Festival. Leonard Maltin referred to the festival as “in a class all by itself,” and I feel honored and privileged to have been granted press credentials to such an event. Here is a peek at what I will be covering.

Please check back throughout the weekend of July 12 for continuing festival updates!