Olivia de Havilland vs. FX: On Opinions, Arguments, and Accuracy

In the aftermath of the Olivia de Havilland oral arguments yesterday, I have seen many reports about what happened during the hearing, and opinions about the case from varied sources. As one who was in the courtroom as it happened, I would like to address a few things that I’ve been seeing frequently over the past 24 hours.

The case is ultimately about holding the powerful accountable to the truth. FX, a big and powerful corporation, took immense liberties with de Havilland’s characterization in Feud, putting vulgar words in her mouth and attributing lines to her that she would not have said, nor signed off on, should she have had the privilege of seeing a script first.  It is true that if the characterization were truthful and accurate, by the standard that we use to judge credible news stories, FX would be well within its legal rights to use her image and likeness. But the false or misleading statements attributed to de Havilland in the series are a disservice not only to de Havilland, but also to the viewers of Feud. No one likes to be lied to or misled, and as I have mentioned before, I myself was misled by the interview that framed the series. I thought it was a real interview that I had missed–I went looking for it, and only when I couldn’t find it did I realize that it was created by the series. I’ve seen just about everything she’s ever done. Can we imagine a passive viewer, who had never heard of de Havilland before, watching Feud? I shudder to think how many passive viewers of Feud are out there who now think that de Havilland gave that interview, and called Joan Fontaine a “bitch” to industry professionals.

This morning, a piece appeared in Vanity Fair whose headline ran “Olivia de Havilland Tries to Prove in Court That She’s Never Used the Word ‘Bitch.'” The first line ran: “You’ll never hear a recording of Olivia de Havilland using the word ‘bitch.’ At least, that’s what her lawyers are arguing now in their ongoing case against FX and its portrayal of the Oscar-winning actress in the series Feud.” This upset me on two levels–first, the gross misrepresentation of the argument (the argument is not that de Havilland has never used the term, but rather she never used it to refer to her sister to industry professionals, the way Feud depicts), and second, the way the article uses shock value and half truths in a similar way to Feud. I did write to Vanity Fair about this, and whether it was due to my input or an independent decision, the article has since been clarified.

But this is what we have come to expect of news and informational sources, of which Feud is one. Another argument I have seen frequently over the past day is one that says “Feud is entertainment, I don’t watch it for historical accuracy.” Entertainment that depicts real people, especially living people, has a responsibility to historical accuracy. Those of us who write about film are inundated regularly with people who believe fictionalizations of real people are rooted in fact. As I work on my biography of Marion Davies, The Cat’s Meow (a fantasy piece about what happened to Thomas Ince on William Randolph Hearst’s yacht) has been a fire that I’ve had to put out every time I give a talk. People love scandal, and if there’s a scandal, they tend to believe rumor above and beyond the facts that disprove it. In addition to the right of publicity claims that de Havilland is fighting for, shows like Feud that add artistic license to real personalities make our lives as film writers that much harder.

In terms of de Havilland and Fontaine, I frequently find myself correcting or defending. One of the things that irked me the most in the courtroom yesterday was the opposing counsel repeatedly referring to the relationship between de Havilland and Fontaine as a “feud.” I highly dislike that term to describe them. They were sisters, who had their ups and downs and good times and hard times. Theirs was a very complex relationship, one that no one understood but them. I make it a point never to judge one sister for her actions regarding the other. Because all we know is the tip of the iceberg of what drove their relationship to be what it was–and it’s truly none of our business anyway. For Feud to touch on that relationship at all, much less without talking to de Havilland first, was inappropriate. 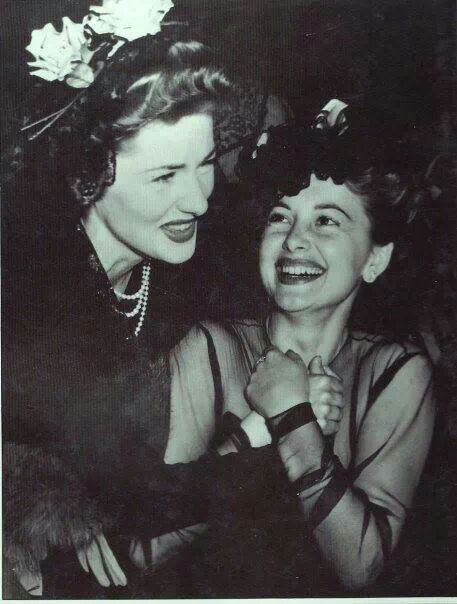 My favorite picture of the de Havilland sisters, on the night Joan Fontaine won the Best Actress Oscar for Suspicion.

I’ve been seeing many comments expressing the viewpoint that if de Havilland wins, it’s going to change the way docudramas are made. It won’t–it will simply hold studios accountable to the truth when the docudrama involves a living person. If the studio is not willing to do accurate research using reliable sources (non-salacious biographical books with endnotes, newspapers, documentaries, interviews), perhaps that living person should not appear in the docudrama. The Divine Feud, the book by Shaun Considine that Feud references in the case as a research tool, is very salacious and I was surprised to see it in FX’s list of sources.

California law is explicit in its different applications of the law to the living and to the deceased, and de Havilland’s right of publicity stands for fictionalized works. If she were deceased, a separate statute exists that exempts fictionalized works like movies, books, and plays from having to answer to right of publicity suits. But Olivia de Havilland is alive, and she has a right to be heard.