Remember How Much I Loved You–Joan and Lilian Fontaine

Joan Fontaine shares a laugh with her mother, Lilian.

First off, thank you to Jill at Sittin’ On a Backyard Fence and Michael Nazarewycz at ScribeHard On Film for hosting this terrifically clever blogathon, focusing on one star per day via the TCM Summer Under the Stars lineup. Since many readers of this site know of my love for Joan Fontaine, I felt that instead of writing a movie review for this blogathon I would contribute something more personal, a small examination of the relationship between Joan Fontaine and her mother, who played secondary roles in several Fontaine films such as The Bigamist and Ivy.

The Lilian Fontaine Garden Theatre as it stands today.

Even today, while Joan lives a quiet life in Carmel at the age of 95, her mother is not far from her mind. Three years ago the Lilian Fontaine Garden Theatre in Saratoga, named for Lilian’s contributions to local theatre, was undergoing renovations. To everyone’s surprise, a huge 5-figure donation came through that would cover all the necessary refurbishments. It was from Joan. She declined to be interviewed, saying that this gift is for her mother, whose ashes are scattered there and who once said about the garden “”If you ever wonder about me, come to this garden, and I’ll be here… somewhere around.” 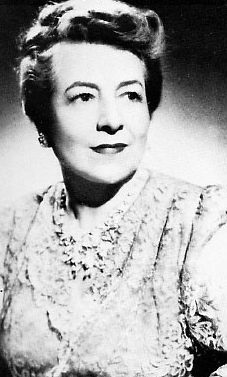 A graduate of the Royal Academy of Dramatic Art and also a trained singer, Lilian was a native of Reading–a large English city in the Berkshires. As an adult she ventured to Japan to try her luck in a performance career and ended up staying, marrying a handsome gentleman named Walter de Havilland. Their first daughter, Olivia Mary, was born in Tokyo on July 1, 1916, and Joan came along 15 months later on October 22, 1917. The de Havilland marriage was rocky, and the girls prone to illness, so on the advice of the doctor Lilian soon moved to Saratoga, California with the two girls in tow, in search of a more hospitable climate for their many ailments. Walter stayed behind.

Olivia thrived in California, but Joan remained very frail. As a young child her shyness and frequent illnesses precluded her from making school friends, and her sky-high IQ rendered it difficult for her to relate to her peers. Relations with her sister Olivia were never sunny, so having a friend at home was not an option. Isolated and often bedridden for months at a time, her mother was her sole companion and best friend. 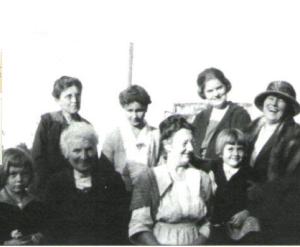 Joan (child in black coat on the right), Lilian (in the black hat, holding Joan’s arm) and Olivia (far left) with family friends in Saratoga.

Lilian’s mothering skills were very much of her time and upbringing. She was determined that her daughters would grow up to be proper English ladies, and strict lessons in diction, manners, and even walking were commonplace in the house. When she remarried, to accountant and archdisciplinarian George Milan Fontaine, the lessons continued under his tutelage. Everything was expected to be “just so,” and if it wasn’t, extreme punishment could be expected. There was little affection in the house. As a teenager, Joan was severely scolded for holding hands with a boy during a concert, and her mother’s harsh words scarred her for life.

Yet through all of this, Joan retained a deep, unconditional love for her mother. When she began to earn money in movies, she sent monthly checks to her mother, supporting her completely of her own will. She offered Lilian, who had never really made it as an actress, roles in her films.

Skip to 5:45 in this clip from Ivy. Lilian is seated directly to the right of Joan, in the dark dress and hat.

When Lilian fell ill with cancer, Joan took over her care. Though Lilian was not always able to show it, Joan finally heard those words of love she so craved from her mother during their very last phone conversation. Right before they hung up, Lilian said to her tenderly “Remember how much I loved you.”

I like to think that this gave them a sense of resolution to a somewhat complex relationship, and that Joan could cope with the loss of her mother with the assurance that she reciprocated her love. It is a graceful end to a life, and a sweet goodbye from mother to daughter.

Lilian with Joan (on the floor) and Olivia (seated) shortly after their arrival to the United States. 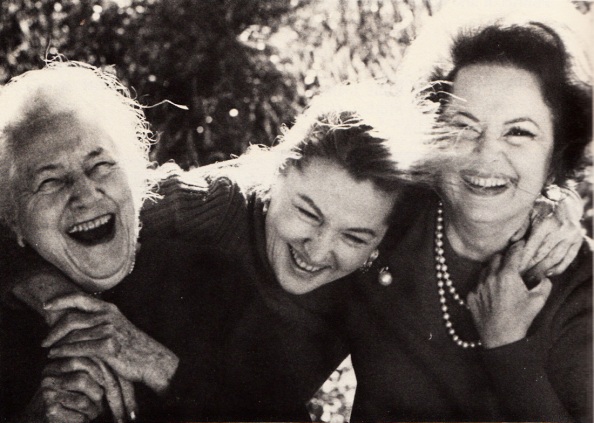 Thanks again to Jill and Michael!