In the above scene, we are presented with a dichotomy that may not be immediately apparent if one is not familiar with Rita Hayworth’s unique position in Hollywood. In The Loves of Carmen, Rita plays the legendary Carmen, made famous by the popular opera and Prosper Merimee’s book on which it was based. Carmen is a Spanish gypsy, in love with soldier Don Jose, and their love combined with Carmen’s wild nature turns tragic for them both. For Rita, playing Carmen should have been the role of a lifetime. She was fiercely proud of her Spanish blood, and her own grandmother had, like Carmen, been a Spanish woman working in a cigarette factory. But professionally, Rita was in constant limbo in regard to her identity as a Hispanic in Hollywood. The character of Carmen presents a particular irony, as Rita had been all but stripped of her Hispanic heritage within the Hollywood system.

Rita Hayworth was born Margarita Carmen Cansino in New York City to a Spanish father and an Irish-American mother. Her father had been a professional dancer in his hometown of Sevilla, Spain, and Margarita showed the same aptitude as a child. The family moved to California and she became her father’s dance partner at the age of 12. She spent her childhood performing traditional flamenco and Spanish folk dances with her father, up and down the coast between San Diego and Tijuana, Mexico. Steeped in the mixture of her father’s Spanish Roma traditions and the Mexican culture of the dance halls in which she performed, Margarita easily saw herself as Hispanic and identified with the Spanish-speaking locals of Tijuana as much as (or more than) she identified with her American peers. 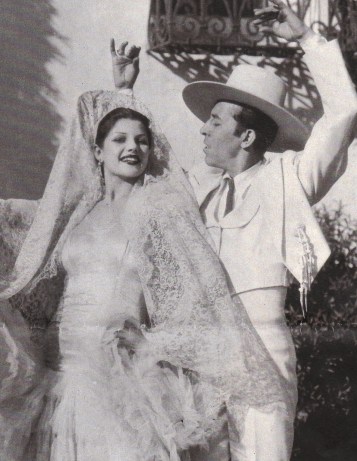 Dancing with her father.

At the age of 16, Margarita garnered her first film role, a bit part in Cruz Diablo which was billed as a “Spanish Robin Hood.” From there, her career slowly grew, with small, stereotypically ethnic roles in Under the Pampas Moon, Charlie Chan in Egypt, and Paddy O’Day with Jane Withers. With her long, jet-black hair and low hairline, it was difficult for Hollywood to know where to place her in an industry dominated by white, non-Hispanic standards of beauty. In order for her potential to be realized in this milieu, shortly following her signing with Columbia in 1936, studio chief Harry Cohn began altering her image.

She underwent painful electrolysis to shorten her “ethnic” hairline, and dyed her deep black hair a light shade of red. When they were finished, she was a  no longer Margarita Cansino–in addition to whitewashing her physical image, Columbia changed Margarita’s name to Rita Hayworth (a variation on her mother’s maiden name, Haworth).

In Blondie on a Budget, one of her first movies after the transformation, she plays Dagwood’s old girlfriend, an all-American girl named Joan Forrester.

In You Were Never Lovelier, she plays an Argentinian, but an extremely Americanized one.

In Gilda, she plays an American living in Argentina.

In 1948, in The Loves of Carmen, Rita finally got the chance to play a character close to her own heart. But instead of Margarita Cansino in the role, we see Rita Hayworth, the product of a Hollywood that could not promote the career of a young woman with jet-black hair and a low hairline. The Loves of Carmen is a tragic double standard that is difficult to get past, but as much as the studio tried to whitewash her image, they couldn’t take away her identity. In Rita’s dance sequence in the village, Margarita Cansino is still there, dancing the way she did as a child.

This is an entry for the Hollywood’s Hispanic Heritage Blogathon. Many thanks to Kay and Aurora!