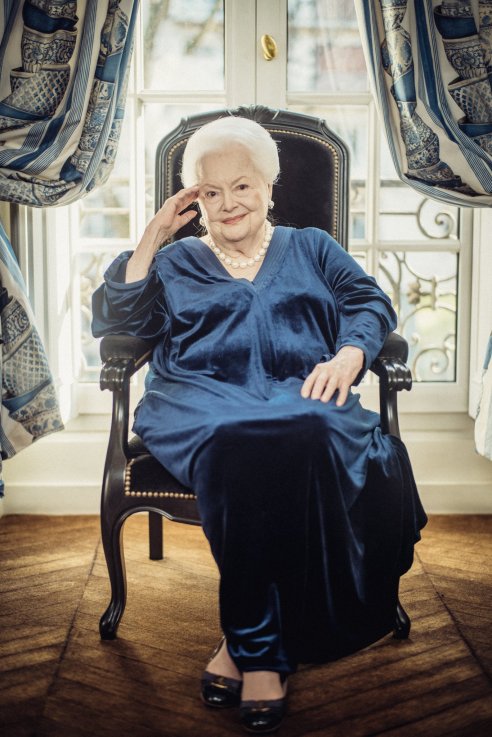 Courtesy of the New York Times, Olivia de Havilland at her home in Paris last month.

As many of you know (certainly those following my Twitter account over the past 24 hours), today I was privileged to attend the oral arguments at the University of Southern California in the case of Olivia de Havilland vs. FX. It was a fascinating day, and a major coup for Backlots to get one of the very limited press seats. I’m pleased to be able to bring you the events as they happened.

The main law building at USC.

The case was heard in the USC Gould School of Law building, and the hearing was part of an agreement between the law school and the 2nd District Appellate Court. Once a year, the court moves its proceedings to USC, in order to give students a taste of what it’s like to be in the courtroom. Before the Olivia de Havilland case was brought before the court, there was another that we heard regarding the firing of a social worker who was negligent in his duties regarding a family in which a child died from abuse. It seemed quite heavy and disturbing. I don’t know enough about that case to have drawn meaning from what was being said by the appellants and defendants, but it was interesting to watch how both sides approached something as sensitive as this, in their body language and word choice.

The de Havilland case came before the court immediately after the final argument in the previous hearing. Three judges sat before the attorneys and questioned them on the intricacies of their arguments–starting with FX, followed by the amicus curiae for FX, followed by de Havilland’s side. The attorney for FX, Kelly M. Klaus, made the argument that de Havilland’s claims do not meet the requirements for “actual malice,” which he defined as necessarily “deliberate” or encompassing “reckless disregard.” He said that FX’s intentions were not bad, and thus they should be protected from claims of portraying Olivia de Havilland in a false light. Jennifer Rothman, the amicus curiae for FX (and the author of the Los Angeles Times op-ed piece “What Does Olivia de Havilland Have Against Allison Janney, to which I responded with this post), cited the Guglielmi case (in which the heir of Rudolph Valentino objected to a fictionalized version of his life) as evidence that biographical films are protected under the First Amendment. She asserted that any decision in de Havilland’s favor would be “devastating” to creative expression.

Finally, de Havilland’s lawyer, Suzelle Smith, came up to speak. Addressing the Guglielmi case, Smith noted that California applies right of publicity cases differently to those who are dead and those who are alive, and that the arguments referred to in the Guglielmi decision are irrelevant to what is at hand in this case. Additionally, when pressed on whether or not FX would have had to procure de Havilland’s permission if the depiction was not defamatory, Smith said no. She argued that the First Amendment does not permit right of publicity claims for accurate, non-defamatory representation. The portrayal of de Havilland, she said, was not accurate, and cited Eastwood v. Superior Court (National Enquirer Inc.) to say that one knowingly false statement can discredit the whole work.

Indeed, if I may interject here as a non-lawyer and the author of an upcoming biography, if I see one glaring mistake in a research piece, it does create a sense of distrust of anything else the author might say. The idea of a work being discredited after one false statement is not only a legal matter, but it’s one that affects us all as laypeople. When I watched Feud, I noticed several glaring errors and those errors changed the way I viewed the rest of the show.

After Smith’s argument, FX was given time for a rebuttal, in which Klaus reasserted the network’s claim that de Havilland hadn’t proven actual malice, and FX should be granted First Amendment protections. The court was adjourned shortly after 4:00.

Smith closed her argument with something I think is quite necessary to point out. This is a lawsuit about the truth, and representing fact as fact, fiction as fiction. We are living in an era in which facts don’t seem to count, and we’ve become accustomed to a gray area that leaves us unsure of what the truth is, or how to root it out. When we become numb to the highest powers in our country feeding us falsities, we hardly blink an eye when a docudrama does it. We should hold the powerful accountable to lies–whether that be from those in political office, or those in corporate America telling the stories we see on our televisions.

We will likely hear a decision in the next two weeks. With this lawsuit, Olivia de Havilland stands up to power–and no matter the outcome of this case, I am proud that we have in our midst a strong 101-year-old woman who’s not afraid to be on the front lines of protecting the truth.