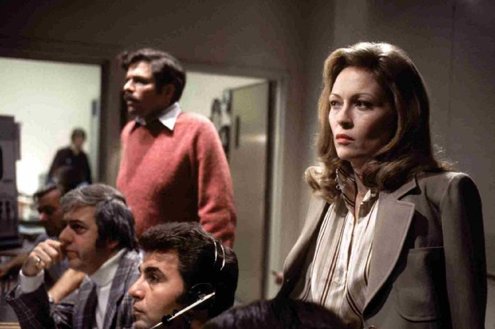 Sunday will be a light day for me, because in the morning I will be going to visit an old research friend in Hollywood. However, the schedule offers some prime choices for attendees on Sunday morning, including a screening of 1961’s King of Kings at the Egyptian at 9:00, Charlie Chaplin’s The Kid at the Chinese multiplex 1 at 11:00, and Children of a Lesser God at 1:00, also at the Egyptian. TCM pulls a bit of a trick on festivalgoers at 2:30, with the simultaneous programming of the conversation with Gina Lollobrigida, and the Live From the TCM Festival interview with Faye Dunaway, which will be broadcast on the channel.

I am going to try to get back from my friend’s by 2:30, in time for the Faye Dunaway interview. Dunaway is one of the most prominent actresses of the 1970s, with starring credits in such enduring classics as Chinatown, Network (for which she won an Oscar), and Bonnie and Clyde. Her appearance at the festival comes as a pleasant surprise–the interview was originally scheduled with Burt Reynolds, but when he had to drop out due to unforeseen circumstances, Faye Dunaway stepped in at the last minute. It will be fascinating to hear what Dunaway has to say about her long career and her Oscar win for Network, playing at the TCM Festival that evening.

Sunday’s schedule includes many spots marked TBD, which is TCM’s way of accommodating movie fans whose film choices filled up quickly. In a TBD slot, TCM will program a movie shown in a previous time slot that was so hugely popular that many fans were left outside due to lack of space in the theater. It is difficult to speculate what will play in a TBD slot, but based on the length of the Faye Dunaway interview, I will likely not make any of the movies in the next time slot except the TBD one. I am looking forward to seeing what that choice will be.

The next thing on the schedule is Network, at 8:00. I changed my flight home so that I could see Network on the big screen, as I feel that it would be remiss of me to let one of the most eerily prescient movies ever to have been made fall by the wayside just for a flight.

Network is the story of Howard Beale, a veteran newsman fired from his job due to poor ratings, who threatens to kill himself on national television. His network sees the ratings value in his remarks, and builds an entire show around Beale and his pseudo-political ravings. In order to boost ratings even further, another show is developed surrounding a terrorist cell–and herein lies Beale’s downfall, and the network’s triumph. The movie won several Oscars, including one for Faye Dunaway’s portrayal of the ruthless news producer, Paddy Chayefsky’s writing, and a posthumous award for Peter

In 1976, the premise of a network manipulating ratings based on the ravings of a “manifestly irresponsible man” was considered satirical and farfetched. But screenwriter Paddy Chayefsky seemed to have a vision of what was to come–today, the basic tenets of Network drive much of our 24-hour news cycle, especially during this presidential election year. Networks know that the incendiary words uttered by certain presidential candidates invite shock and outrage, and so they broadcast those words over and over, analyze them, and discuss them, because they know that people will tune in to hear them. The symbiotic relationship between outrage and ratings is well known now. We seem to be living out what Paddy Chayefsky envisioned in his imaginary world of news cycle absurdism in Network. It is a simultaneously fascinating and extremely frightening situation.

See you in Hollywood! As usual, you can follow along with all the action right here on the blog, as I enable a live Twitter feed during the festival. To send us off, hit it Bing!