Book review: THE FIRST KING OF HOLLYWOOD: THE LIFE OF DOUGLAS FAIRBANKS

With his swashbuckling persona, jaw-dropping acrobatics and million dollar smile, Douglas Fairbanks was the definition of what it means to be a movie star. Known equally well for being half of the most influential celebrity power couple of the 1920s, and for his lavish estate known as Pickfair that he owned with wife Mary Pickford, Fairbanks was the personification of Hollywood fame combined with silent-era high living.

In her new book, The First King of Hollywood: The Life of Douglas Fairbanks, longtime Fairbanks expert and historian Tracey Goessel writes in exquisite and meticulous detail of the star’s life, rise to fame and his sometimes difficult marriage to Mary Pickford. It is a book written with obvious love, and crafted to give the reader a full and accurate picture of a complex character.

There is truly no one better to write this book than Tracey Goessel. A Fairbanks devotee for decades, she is on the board of the San Francisco Silent Film Festival and has contributed enormously to the visibility of both Douglas Fairbanks and Mary Pickford in the world of silent film for many years. When I heard that a Douglas Fairbanks biography by Tracey Goessel was coming out, I knew immediately that it was going to be definitive.

Right from the beginning, Goessel gives us the reasons why the man known as “Doug” in the industry (though Mary Pickford always called him “Douglas”) remains important 76 years after his death. Goessel notes the fact that we have Fairbanks to thank for the Oscars (he co-founded the Academy of Motion Picture Arts and Sciences), for Gone With the Wind and The Wizard of Oz (he gave Victor Fleming his start), and for the latest releases from United Artists (he co-founded the company). Her assertions are thought-provoking and accurate. There are very few silent stars who remain as relevant and modern as Douglas Fairbanks, both in his legacy and his onscreen persona.

Goessel’s level of detail about Fairbanks’ early life is nothing short of astounding. She has traced his family tree and stories connected with it back several generations, and provides several wonderful stories regarding the early life of the man who would become Douglas Fairbanks. She shows how his early aptitude for mischief, drama and acrobatics affected his rise to fame and shaped who he became onscreen. My favorite story from his early years in film deals with an early role in a film called The Habit of Happiness. Goessel relates that in order to make the blue-collar extras laugh in a scene where they were supposed to be entertained, Doug told the smuttiest jokes he could think of–so smutty, that the lip-readers in the preview audience were offended. 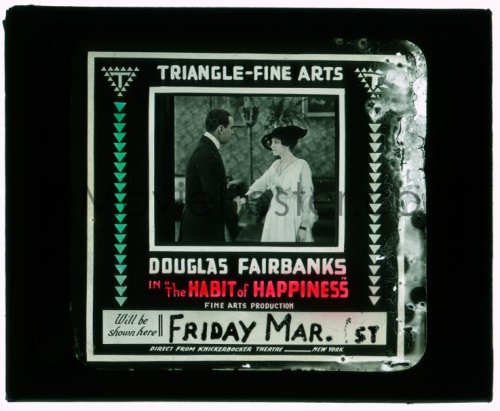 Before his film stardom, Fairbanks was in a Broadway play in New York when a group of Biograph players, including Mary Pickford, came to see the show. D.W. Griffith said to Mary regarding Doug: “Now there’s a fellow who will someday make a great impression in pictures.” He made a great impression on Mary as well, and they began a relationship, marrying in 1920 very shortly after Mary procured a divorce from her then-husband Owen Moore. As husband and wife they lived at Pickfair, a monumental estate at 1143 Summit Drive in Los Angeles that was host to countless industry parties and get-togethers.

Again, the level of detail in Goessel’s account is marvelous. We are shown the inner workings of the most powerful couple in Hollywood, including all its difficulties when they both stray from fidelity–Mary with Buddy Rogers and Douglas with Lady Sylvia Ashley–and despite trying to make their marriage work, they simply couldn’t.

Another triumph of this book is the interweaving of what was going on in Hollywood with the events of Fairbanks’ life. A prime example is the attention that is given to the advent of sound in the mid-1920s, during which all of Hollywood was waiting on baited breath to see what would become of this new technology. Pickford and Fairbanks were in the audience when John Barrymore’s Don Juan premiered, the first full-length film to feature a Vitaphone score, and from the beginning he wasn’t too thrilled with the prospect of sound on film. Indeed, Douglas Fairbanks was one of sound’s victims–his second-to-last film, ironically, was The Private Life of Don Juan.

This is highly recommended reading for anyone with an interest in Hollywood of any era. The modern film aficionado will see countless links to the modern era, while the classics fan will see the rise and fall of one of the all-time great film stars. Tracey Goessel has written a book fit for Douglas Fairbanks. And that’s saying a great deal.

If you would like to order it, here is the link to the book on Amazon.