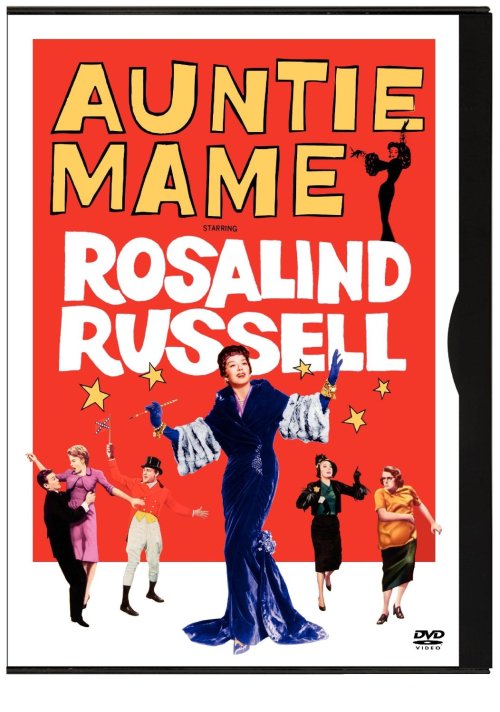 Hello again readers, it is a rare occasion when I make two posts in a single day, but in addition to being Memorial Day (necessitating my post about the Hollywood Canteen this morning), today is the last day of the CMBA Fabulous Films of the 50s Blogathon and I am signed up to cover one of my favorite films of all time. Far be it for me to pass up a chance to talk about Auntie Mame, so I am writing my second post of the day and I can’t wait.

Auntie Mame is a unique piece of art. More than just a film, it is a beautiful character study, a celebration of eccentricity and love of life. Mame Dennis is a true bon vivant, a woman who is so in love with life that it sometimes causes her trouble. She is also sublimely affectionate, maternal, and caring, traits that are seemingly the antithesis of what Mame Dennis stands for, but ones that strangely fit her character. Though Mame does get married, romantic love does not drive the plot. Instead, it centers around loving life, celebrating all that it has to offer.

The original novel of Auntie Mame was written by Patrick Dennis in 1955, and was based on the eccentricities of his much beloved aunt, Marion Tanner. Tanner was known around New York for her red brick house at 72 Bank Street, which often served as a haven for radicals, struggling artists, and other Bohemian personalities. Much like Auntie Mame and her home at 3 Beekman Place, Marion Tanner welcomed strangers into her home for parties and a safe haven, a practice that very much worried her nephew. When he wrote Auntie Mame, she delighted in the comparison, and often brought it up in conversation with guests at her endless parties.

Rosalind Russell, the stage and film star who would ultimately become Auntie Mame’s first and most highly respected interpreter, had her own connection to the character. Shortly before its publication, Russell was sent a copy of the book by the author. When she picked it up to read, she could hardly believe what she was reading. “It’s the Duchess,” she said to her husband, “Someone has written the Duchess.” “The Duchess” was the name that the Russell family had given to Rosalind’s older sister Clara. A stylish, larger-than-life character who knew and loved everyone of importance, Clara gave off an air of royalty that spurred the nickname. For Russell, this character was simply a fictionalized version of the sister she knew and loved so well. The book took on a further significance for Russell in that Clara had died too young of a stroke not long before, and the story brought back a flood of memories that were hard to shake. After the book was published and she was asked to do Auntie Mame on Broadway, she immediately agreed, basing her interpretation on the character traits of her sister.

Rosalind Russell as a child (bottom right) with her siblings. Clara is at the top with the large bow.

The show ran for 639 performances from October 31, 1956 to June 28, 1958. Rosalind Russell and Peggy Cass were nominated for Tony Awards, and Peggy Cass won for her portrayal of frumpy assistant Agnes Gooch. Warner Bros. latched onto the idea of a film, with Russell and Cass reprising their roles, and the film was released in December of 1958. Several other cast members of the original Broadway show appeared in the film, including Jan Handzlik, the boy who played Patrick.

The plot of the movie is not particularly important–it is a character-driven narrative that puts emphasis on celebrating individuality. A young boy, Patrick, is sent to live with his eccentric aunt after his father dies, leaving him an orphan. He arrives at the door of 3 Beekman Place, to find his Auntie Mame giving a wild party–having forgotten that her nephew was supposed to arrive that day. But she welcomes him with open arms, and immediately takes him under her wing as her surrogate son. Complicating matters is Mr. Babcock, the representative from the Knickerbocker Bank that Patrick’s father assigned to make sure “that crazy sister of mine doesn’t do anything too goddamned eccentric.” Mame and Mr. Babcock don’t agree on how to raise Patrick, but ultimately Mr. Babcock has the upper hand and sends Patrick to elite, snobbish private schools, turning him into one of the snobs that Mame detests. At school he falls in love with Gloria Upson, an empty-headed, vapid, country club girl that he intends on marrying. Mame objects to Patrick marrying a girl with “braces on her brains,” but instead of telling him that outright, she hosts a family dinner for the girl’s conservative parents in which she lets her eccentricity out in full force. The girl and her parents are deeply offended, and leave in a huff. Patrick sees that they are unwilling to accept how he was raised, and he reverts back to being the loving nephew of his loving Auntie Mame.

The movie is quite long, covering the period from the 1920s through the end of the Depression as well as Mame’s marriage to her husband Mr. Burnside and her eventual widowhood, but the charming and delightful characters make the time rush by. Rosalind Russell is undoubtedly the star of the show, but there are great performances by many members of the supporting cast. Peggy Cass repeats her Tony-winning performance and gives a hilarious interpretation of Agnes Gooch, the assistant who ends up pregnant out of wedlock (or is she?), and the actors who play Gloria’s conservative parents are fantastic. Adding to the show-stealing performances is the marvelous Joanna Barnes, who has a gift for playing rather unlikable characters to perfection. Here is one of my favorite scenes from the movie.

Director Morton Da Costa was known for being a master of the “in” shot, a method of focusing in on the character at the end of a scene by spotlighting the face while fading the rest of the scenery to black. The technique undoubtedly comes from Da Costa’s years in the theatre scene, as the effect is very theatrical and unusual for film. This was used very nicely in many scenes in Auntie Mame, as well as in another Da Costa triumph, The Music Man, four years later.

Shirley Jones in The Music Man (1962). At the end of the video, watch for Da Costa’s signature “in” shot.

Auntie Mame received wide critical acclaim upon its release. Rosalind Russell and Peggy Cass were both nominated for Oscars, and Rosalind Russell won a Golden Globe for her performance. The film was additionally nominated for Best Picture, Best Art Direction, Best Cinematography, and Best Film Editing at the Oscars.

As for Marion Tanner, the basis for Auntie Mame, she saw the film’s release and lived a very long and full life for a long time afterward. Sadly, she and her nephew had a falling out due to worries about her carefree lifestyle, and they spoke rarely in her later years. She died in 1985 at the age of 94, and never lost her enthusiasm for life. “I do believe in people, you know,” she liked to say.