An Interview with Kendra Bean, Author of VIVIEN LEIGH: AN INTIMATE PORTRAIT 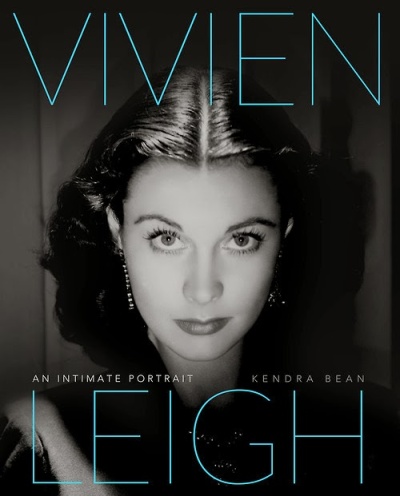 Mysterious, ethereal, and tremendously charming, Vivien Leigh is about as captivating as it comes. It is easy to simply marvel at her beauty, the likes of which the entertainment industry had never seen before and, in my opinion, has never seen since. Her stunning looks would be enough to secure Vivien’s place as one of the most compelling performers ever onscreen. But when one digs deeper into the life and career of the woman who was Scarlett O’Hara, a new person emerges–a sensitive, intelligent woman who fought intense demons in her personal life while maintaining a powerful inner core strength that came through in her life and her work.

It has been 25 years since the last major Vivien Leigh biography, and earlier this month classic film fans were treated to a unique and very special portrait of the star. Kendra Bean, the owner of vivandlarry.com and resident Vivien Leigh expert in the online classic film community, has written Vivien Leigh: An Intimate Portrait, a work that can be described as a labor of love, a glorious posthumous gift to Vivien Leigh. There have been several high profile biographies of the actress, the books by Alexander Walker and Hugo Vickers have left Kendra with some massive shoes to fill. But fill them she does, and with literally thousands of photographs and personal documents, Vivien Leigh: An Intimate Portrait gives readers an angle on Vivien’s life that has not been seen in previous books. In addition, Kendra is the first biographer to conduct research in the Laurence Olivier Archives, allowing this book to cover aspects of Vivien Leigh’s marriage to Laurence Olivier that have been previously unknown.

I first met Kendra several years ago, before Backlots existed. I remember her preparation for her move from California to London, where she now resides, and I was lucky enough to be able to attend A Weekend With the Oliviers, Kendra’s 2011 tour of London through the eyes of the Oliviers. I also feel a special personal connection to this book, as I have witnessed its growth from just a seed planted straight through to its triumphant release in early October. Needless to say, I am very proud of Kendra for what has proven to be a work as beautiful as Vivien herself.

Here is a recent interview I conducted with Kendra. You can purchase your copies of the book by clicking here!

AN INTERVIEW WITH KENDRA BEAN

Without a doubt, you are the most passionate and knowledgeable Vivien Leigh aficionado I know. When did you first discover your love for Vivien, and what was it that most attracted you to her?
Haha, thanks! I discovered Vivien during my first viewing of Gone With the Wind when I was 18. I was so taken by the film that I started reading anything I could that would tell me more about it, which included several Vivien biographies. She had what the playwright John Osborne described as a “magic alchemy;” a mixture of great beauty, an interesting life, and an intriguing personality. I’ve said this in another interview, but it’s so true, so I’ll say it again: sometimes when I read biographies of famous people, I feel like my curiosity has been satisfied. But I read all the Vivien books and still wanted to know more! I find her to be mysterious, magnetic, variously admirable and sympathetic, and on some level relatable.
You have the distinction of being the first Vivien Leigh biographer to delve into the Laurence Olivier archives, giving you access to such extremely sensitive documents as her medical records and files. The book quotes several letters and private conversations, especially in regard to Vivien’s manic depression. Are these things you found in the Olivier archives?
Most of these letters and documents were found in the Olivier Archive, and some of them were in the Jack Merivale papers at the BFI. The medical-related documents didn’t cover her entire medical history, but they were enough to get some real insight into her bipolar disorder and how it was treated over the years. Of particular interest were the documents relating to the infamous Elephant Walk incident in 1953, and its aftermath (discussed in chapter 6 of the book). I felt like this was such a crucial point in Vivien’s life, but it always seemed to be such a grey area, full of speculation and rumor.
What was the most surprising thing you learned about Vivien while working on this book?
I’m not sure that I found anything really that surprising about Vivien because her qualities as a person and as a performer (both positive and negative) have been discussed and written about often over the years. Most of the material I looked at reinforced those qualities. There weren’t any huge revelations as to who she was or anything like that. What emerged instead were interesting details that I felt helped me better understand her career and personal life. Also, because these particular archives belonged to other people and Vivien was included as part of a broader context, there was a lot of material pertaining to how other people (both fans and those close to her) felt about her. I thought that was really great because it created a broader perspective. It wasn’t just how she felt about things happening in her life; it was also about the impact she left on others, and I hadn’t read a lot of it before.
You are also an expert on Vivien Leigh’s marriage to Laurence Olivier. In your research, what new insights did you gain into their marriage? Did your perception about them and their relationship go through any changes as you researched the book?
My perceptions didn’t change, per-se, I just got a more intimate understanding of some of the ins and outs of their marriage. Today it seems fashionable to talk about things like Laurence Olivier’s negative personality traits, and how he was horrible to her, but actually it became obvious going through all of that stuff that they were really close, that he cared a lot about her. I was surprised by how much concern Olivier expressed for Vivien in letters to other people, how often he told people he was proud of her performances, how much effort he put into making sure she was taken care of when she was going through really bad times with her mental troubles during their marriage, and how much he kept tabs on her after their divorce – that part really surprised me.
Before beginning this book, what adjectives would you have used to describe Vivien? Now that your book is finished, have those adjectives changed?
Mercurial; headstrong; passionate; vulnerable; significant. I wouldn’t change any of these.

This entry was posted in Lara Gabrielle Fowler and tagged gone with the wind, laurence olivier, vivien leigh, vivien leigh: an intimate portrait. Bookmark the permalink.

4 responses to “An Interview with Kendra Bean, Author of VIVIEN LEIGH: AN INTIMATE PORTRAIT”