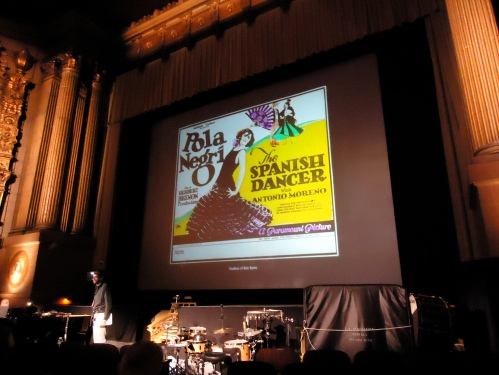 As is a running theme throughout the festival, today’s lineup focused on recent restorations of newly discovered or newly constructed prints. For me, the most interesting restoration story from today had to do with The Spanish Dancer, and how the film was put together like a puzzle, using pieces found all over the world individually. The pieces were spliced together, and the complete film began to emerge as a whole unit, as it had never been seen since its release in 1923. It is remarkable how resourceful archivists can be in their determination to restore and preserve–it gives me security that these films are safe in their hands, and that we will be able to keep them to show future generations.

Here are the movies we saw today:

The day began at 10:00 with a series of Felix the Cat cartoons. As they were shown on the big screen in original 35 mm with live music, the showing of the cartoons was introduced by Leonard Maltin as a historic event–they are very rarely seen this way. Indeed, it felt like a historic event. We saw 7 cartoon shorts featuring Felix, and they came alive with the help of some great avant-garde live music. The titles of the shorts:

This may be my favorite movie of the day. It was introduced in such a way that didn’t give me much hope for it, but it turned out to be a smart, focused plot following a clever, witty, script. I found myself really enjoying it! Starring Pola Negri and Antonio Moreno, it tells the story of a gypsy girl in love with a count, and when the count is condemned to death for breaking one of the King’s decrees, the gypsy girl goes to great lengths to try to save him. It’s a complex plot, but that’s the basic idea, and I would highly recommend that you see this film when it is released, so I don’t want to give away any major plot points. Another interesting tidbit about this film is that the young prince, whom the gypsy girl saves from falling off a horse at one point in the movie, is played by none other than a 6-year-old girl named Dawn O’Day who would later become known as the 1940’s movie actress Anne Shirley.

This was a sweet story about love and marriage, and how a woman can make a complete turnaround in her personality when provided with satisfactory circumstances. A sort of cold fish snob by the name of Nora Marsh comes to live with her brother in a roughneck part of Alberta, Canada, and immediately makes a bad impression with her haughty manners and tendency to look down on others. She has no domestic abilities whatsoever, and constantly irritates her brother’s wife. Finally though, she somewhat suddenly proposes marriage to the houseman, and they move in together. It was not a match made in heaven, and they were unhappy for quite some time, due to various hardships they encounter. However, by the end all is mended in a quaint, sweet way that I described to my friend Marya as “very Canadian.” There just doesn’t seem to be a bad bone in this whole movie.

This was a very unusual and special screening of the documentary footage taken by cameraman Frank Hurley on the infamous Shackleton expedition through the frozen Antartctic. Breathtaking film of the landscape of Antarctica as well as profiles of the animals Shackleton encountered, make this film a really intriguing and different documentary. It looks markedly different than any other true-to-life film that I have seen from that era–instead, it resembles more something like March of the Penguins. To top off the unusualness of the film, Shackleton’s original script from when the film was screened upon its first release, was read by an actor accompanying the score.

By this point in the evening, I was beginning to feel some exhaustion, but was eager to see this film. The movie was supposed to start at 7:00, but after the staff cleared the theater to do soundchecks after South, they didn’t re-open for Pandora’s Box at 7:00 as expected. We were told that it would be another 15 minutes or so, but it was a full 45 minutes after 7:00 that they finally re-opened the theater. The movie itself didn’t start until 8:15, and for someone who has been sitting in a theater taking notes and viewing 4 movies over the course of 8 hours, that was too late. I nearly fell asleep in the middle of Pandora’s Box due to the hour and my exhaustion, but managed to keep myself awake long enough to talk about the film in this post. It was a very interesting story of how this film came to be–there exists no original negative, all the footage they have comes from the original restoration that was done years ago, and the funding for this restoration comes from none other than Hugh Hefner, of all people. The film is an exquisite example of German expressionist filmmaking, that reached a height in Berlin in the 1920’s and was the genesis of countless other philosophic movements within filmmaking over the past 90 years. The film tells the story of a woman, Lulu, who simply allures men and enjoys them. When she accidentally/is forced to commit a murder, she is sentenced to 5 years in prison but manages to escape. The ensuing details all lead to Lulu’s further spiraling into problems and ultimately…well, I won’t give away the ending. This showing was only the second time this restoration had been seen by a North American audience, and it was the world premiere of a new score for the film, which was absolutely stunning.

I can’t say that I was wild about the restoration. It made the image too modern, too perfect. A movie from this era should be grainy, it should have a specific look to it that was lost in this restoration. It looked like it came from a DVD, or should have been a scene in The Artist. I’m glad they restored it, but it would have been more appealing to me if they had taken care not to wipe away all the grain.

Unfortunately, due to the extremely late start of Pandora’s Box, I was not able to stay for the sixth film: THE OVERCOAT, owing to my own exhaustion as well as concerns for getting home safely and in time to write this post. I was disappointed, as I had planned on reviewing every film for this blog, but I felt I needed to take care of my health first. Sometime in the future, I will get a copy of The Overcoat and review it here, to make up for missing it at the Silent FIlm Festival.