STAR OF THE MONTH ANALYSIS: Bipolar Disorder in Classic Hollywood

After the difficult birth of her first child in 1943, Gene Tierney began showing some serious signs of mental instability. She ultimately spent a good part of her adult life in and out of mental institutions, struggling with what we would now term bipolar disorder (then known as “manic depression”), a mental illness that seems to be all too prevalent within the realm of classic Hollywood. Here, I would like to take a look at many of the stars who struggled with this illness, and how it affected their lives and careers.

Bipolar disorder is defined by the National Institute for Mental Health as “a brain disorder that causes unusual shifts in mood, energy, activity levels, and the ability to carry out day-to-day tasks.” It is documented that many creative people have suffered from it, and as medication did not become available until relatively recently, many of our classic film stars lived untreated, self-medicating with drugs and alcohol or suffering painful electroshock treatments, the only known treatment before the advent of lithium in 1970, which is now the standard medication in treatment of the condition.

Sadly, Gene Tierney was one of the very few who came through to recount her experiences, with the vast majority of the stars having their lives ravaged by this horrendous disorder and thus retreating from public life. With mental illness still carrying an unbearable stigma, it took great courage for Tierney to come out and tell her story to a world that looked upon her as a flawless star and idol. As mentioned before, her condition was triggered by the birth of her daughter Daria in 1943. She committed herself voluntarily to the Harkness Pavilion in New York, later to be transferred to the Institute of Living in Hartford, Connecticut. She received many shock treatments, which she claimed destroyed her memory, and she became a vocal opponent to the practice. In 1957, she was seen trying to attempt suicide, and was admitted to the Menninger Clinic in Topeka, where she worked part-time anonymously as a salesgirl as part of treatment. She wrote about her experiences in 1979, one of the first actors to recount her battle with mental illness, and managed to keep her condition under control for the rest of her life. 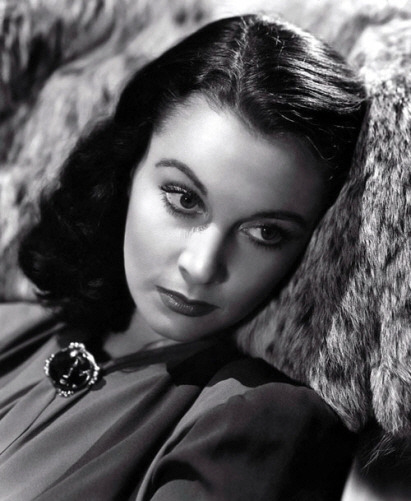 Having come through a somewhat similar situation as Gene Tierney, Vivien Leigh began exhibiting strange behaviors around 1945, shortly after suffering a miscarriage following a fall on the set of Caesar and Cleopatra in 1945. According to those closest to her, Vivien would go through a period of restlessness, followed by a massive outburst of anger and vitriol (known as the “manic phase”), and then a deep depression during which she would not remember her mania.  A particularly severe episode occurred while Vivien was in Ceylon filming Elephant Walk with Peter Finch–her manic phase was so heightened that she had to be sedated and flown home, and subsequently replaced in the picture by Elizabeth Taylor. Though her behaviors became the worst in this period between 1945 and her death in 1967, many of her friends recall that she had been exhibiting milder episodes for quite some time–some remembering it from her childhood. In his autobiography, Confessions of an Actor, her husband, Sir Laurence Olivier, recalled his experiences with her illness:

“Throughout her possession by that uncannily evil monster, manic depression, with its deadly, ever-tightening spirals, she retained her own individual canniness–an ability to disguise her true mental condition from almost all except me, for whom she could hardly be expected to take the trouble.”

The story of Frances Farmer is perhaps the most well-known case of mental illness in classic Hollywood, due to the sensational media coverage of the time as well as the biopic starring Jessica Lange in 1982. Unfortunately, many of the true details have been sensationalized for media publicity, and it’s difficult to get accurate information. What we do know is that Frances Farmer was arrested for drunk and disorderly conduct in 1942, and after behaving strangely at her hearing the next morning, she was jailed and sent to L.A. General Hospital where she was diagnosed with manic depression. She was later diagnosed with paranoid schizophrenia, and was given a series of shock treatments to “cure” her. She alleged horrendous conditions at the mental hospitals, and despite (or perhaps because of) all these invasive medical procedures, Farmer lived with her illnesses for the majority of her life. Her autobiography, Will There Really Be A Morning? was published posthumously in 1973.

The young actress who made waves with her remarkable performance as Helen Keller in 1961’s The Miracle Worker, has gone on to become the living embodiment of how one can come through mental illness to thrive. From childhood, Duke recalls feeling extreme highs and lows, which came to a peak during her late adolescent years. She exhibited extremely erratic behavior throughout her life, including a whirlwind 13-day marriage, leading people to believe that she had a problem with drugs and alcohol, with which she self-medicated. She was finally diagnosed with bipolar disorder in 1982, relatively late in life. Her condition has stabilized, and she wrote her autobiography, Call Me Anna, in 1988. She now devotes her time to educating people about the disorder and mental illness in general. I had the great honor to meet her in 2009, when she came to San Francisco with a production of Wicked.

The stars of classic Hollywood did not have the advantages of medical treatments such as lithium that are available today. Fortunately today’s young stars have the luck to be able to get themselves treated if they so choose, but the diagnosis of bipolar disorder is still rare in Hollywood, probably due to fear of the stigma. It’s really crucial that it be eradicated, and the autobiographies of Gene Tierney and others I feel can help do that.

12 responses to “STAR OF THE MONTH ANALYSIS: Bipolar Disorder in Classic Hollywood”