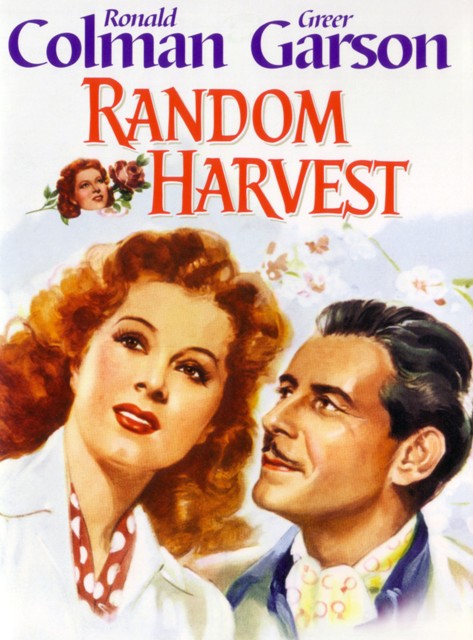 Today being Ronald Colman day on TCM’s Summer Under the Stars schedule, I was so pleased to see that Random Harvest had been scheduled for the primetime slot. One of the greatest screen romances and nominated for seven Academy Awards in 1942, this is one of my all-time favorite movies.

A brief speed-through of the (rather complicated) plot: The story is of Paula (Greer Garson), a chorus girl who befriends a shell-shocked army veteran (Ronald Coleman) who has lost his memory. The man calls himself “John Smith” or “Smitty,” though he knows that is not his real name. Paula and Smitty become great friends, ultimately falling in love and getting married. Smitty’s condition improves and he finds work, and after Paula gives birth to their child, a boy, he goes off to an interview. He is hit by a taxi on the way and the shock reverses him back to his old self–his life with Paula is completely erased from his memory. He returns to his original life and family, and becomes a successful businessman named Charles Rainier, taking over the family company. By this time Paula has lost her son, and having searched for Smitty for many years, she finds his picture in the newspaper as Charles Rainier. Under the name of Margaret, she goes to work as his secretary, hoping to jog his memory. He does not remember her, and she does not tell him of her true identity. She constantly drops clues about his identity, but to no avail–the memories do not come back. Eventually Charles goes into politics, and proposes to Margaret. She accepts. As they build (or rebuild) a life together and Charles’ political life flourishes, Margaret tells Charles about her life before him–not revealing that the man she lost was him. He tells Margaret of the past he doesn’t remember, and hopes that their marriage can help heal their heartbreak. Margaret finally can’t take it anymore and goes on a vacation–visiting the little cottage in Liverpool that she and Smitty inhabited when they were married. Charles is called to handle a strike in Liverpool, and when he goes to mediate, the surroundings trigger memories in him. His life as Smitty slowly comes back, and he makes his way to the cottage, he and Margaret/Paula meet–and Smitty’s memory comes back. The film ends with Smitty yelling “Paula!” and a passionate embrace.

It is a beautifully done film in all respects. Despite its intense romantic tone, the plot is pretty believable (and probably even more so to 1942 audiences, who were accustomed to hearing about shell-shock victims) and we really identify with and feel for the characters. Greer Garson is magnificent, as is Ronald Colman. I must say that there is really something about Greer Garson in black and white. We all love seeing her flaming red hair in the color movies she made, but her lovely chiseled features are better accentuated in black and white and I actually prefer her in films like Mrs. Miniver and Random Harvest rather than her color films. She is certainly a stunningly beautiful woman, and the softness of the photography in Random Harvest really serves her well. Not to mention, of course, the quality of the material shows us her tremendous skill as an actress. Both she and Ronald Colman were nominated for Academy Awards for their performances, in addition to 6 other nominations for the film:

This song, sung at the very beginning of the film, when Paula and Smitty first meet, I think is the highlight of the film:

I truly adore Random Harvest. If you haven’t had the chance to see it, I highly recommend it.