Maureen O’Hara, whose subtle Irish beauty and fiery red hair made her a favorite of director John Ford, died yesterday in her sleep at 95. In recent years she had moved from her home in the south of Ireland to Boise, Idaho, to be with her family, and was continuing to make appearances as late as 2014, when she appeared at the 2014 TCM Classic Film Festival.

Born Maureen FitzSimons in the Dublin neighborhood of Ranelagh on August 17, 1920, Maureen had a few bit parts in 1938 before making her formal debut with her mentor Charles Laughton in Jamaica Inn in 1939, which was followed by The Hunchback of Notre Dame (1939) and Dance, Girl, Dance (1940). In 1941, she played Angharad in How Green Was My Valley directed by John Ford, with whom she would go on to make 5 feature films and whom she would always name him as her favorite director.

With Walter Pidgeon in How Green Was My Valley (1941).

She became an American citizen in 1946, and raised issues with the naturalization documents that listed her as English instead of Irish. She successfully lobbied to have the documents changed, and it marked the first time in American history that an Irish person was declared a citizen of Ireland, independent of Great Britain. “It was one hell of a victory for me,” she later wrote, “because otherwise I would have had to turn down my American citizenship. I could not have accepted it with my former nationality being anything other than Irish, because no other nationality in the world was my own.”

Her bright red hair made Maureen a natural for Technicolor, and with John Ford directing, she made The Quiet Man with frequent co-star and long time friend John Wayne in 1952. In The Quiet Man, set in Ireland and filmed in Cong, County Mayo, Maureen was able to show the national pride for which she had fought so hard 6 years earlier, and was able to speak a bit of Irish Gaelic while the beautifully photographed Technicolor accentuated the Irish landscape.

In an interesting side note, the dialogue in this clip translates to a situation in which she had “sent her husband from her bed,” and was written in Irish Gaelic in order to avoid the censors.

She married several times, but the love of her life was Charles Blair, a pilot who died in a plane crash in 1978. She had one daughter, Bronwyn, with William Price, and in her last years lived with her grandson, Conor.

I was lucky enough to meet and spend time with Maureen O’Hara in 2011, while I was studying abroad in France and had the opportunity to travel to Ireland for the Maureen O’Hara Classic Film Festival, organized by several friends of mine and taking place near her home in Glengarriff, County Cork. The festival included showings of several Maureen O’Hara movies on the big screen, as well as a signing event where Maureen signed my copy of her book, ‘Tis Herself. 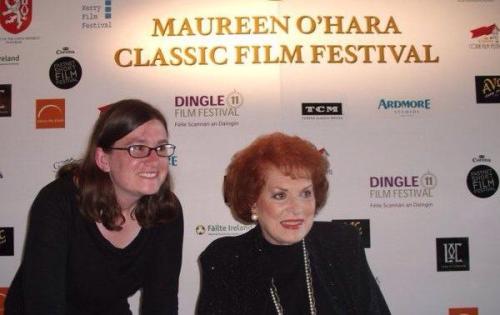 Because my friends organized the event, I had the great privilege to be invited to join Maureen for a chat in the hotel pub on the last night of the festival, where she joked, told stories, and was just as fiery and wonderful as I had hoped she would be.

This is a video made by my friend Sara, who helped to organize the festival and who showed this movie on the big screen with Maureen there. It moved Maureen to tears at the festival, and it now moves me to tears remembering her.

Tagged classic film, hollywood, how green was my valley, ireland, Maureen O'Hara, the hunchback of notre dame, the quiet man