On June 1, 2020, Marilyn Monroe would have turned 94 years old. Though she died at the tragically young age of 36, Monroe was refreshingly candid and unbothered by the concept of aging. “I want to grow old without facelifts,” she told an interviewer, saying she couldn’t wait to retire to Brooklyn when her career was over. If things had been different, her genes tell us that she likely would have been alive today (despite her mother’s difficult life, she lived into the 1980s and her older half-sister Berniece is still alive, turning 101 in July). But sadly, a long life was not to be, and she lives on as a young, vibrant woman frozen in time.

The image of her skirt blowing up on the subway grate, her wide, flashy smile, and her version of “Happy Birthday” sung JFK have become synonymous with that era of American popular culture. But Marilyn Monroe remains one of the most misunderstood figures of Hollywood history. The real woman behind the image was the polar opposite of what her public perceived her to be. A quiet introvert with a sweet disposition, Monroe loved children, books, animals, and writing poetry. She disliked crowds and was happiest when she could be at home with a book. Her difficult childhood had precluded her from graduating high school, but she desperately tried to make up for it by enrolling in evening UCLA extension courses as an adult, while working at the studio during the day.

She was also fiercely political and had a strong moral compass with activist instincts, and a keen interest in current events. Growing up during the Depression in a series of foster homes including time spent at an orphanage, Monroe naturally empathized with the underdog and easily saw societal ills, often relating them to the struggles of her own life. On the set of All About Eve in 1950, she relaxed between takes by reading her book, The Autobiography of Lincoln Steffens. Those on set warned that she shouldn’t read the autobiography of a muckraker around the studio heads, as in era of McCarthy it might destroy her burgeoning career.

Reading Ulysses, that she was indeed reading for pleasure at the time, as photographed by Eve Arnold.

Monroe was one of the first stars to openly defy the studio system, brazenly violating her contract to study at the Actor’s Studio in New York. When she came back, she demanded director approval and had created her own production company, Marilyn Monroe Productions. She knew her power–she knew that she was the biggest box office draw that Twentieth Century Fox had, and could use that as leverage to break an unjust and exploitative system. When she married Arthur Miller in 1956, she found herself caught up in the maelstrom of anti-communist fervor, as Miller was called to testify before the House Un-American Activities Committee and refused to name names. Monroe was unafraid to use her power and her time with the press to voice her support for Miller’s cause.

Deeply concerned about the nuclear post-war world in addition to the witch hunts going on in the United States, Monroe closely followed the founding of SANE, the committee that advocated anti-nuclear testing policies and ultimately complete nuclear disarmament. When a Hollywood chapter was founded in 1960, Monroe became a founding and active member. She told a reporter during the era of SANE’s founding “My nightmare is the H-bomb. What’s yours?” She used her many media connections to push for Democratic and pro-peace policies that she believed would make a more just world. Below is a letter she wrote to Lester Markel of the New York Times with her ideas on presidential candidates for 1960. 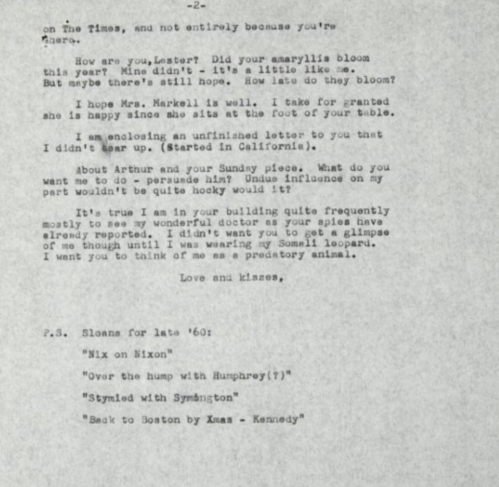 An oft-told story is one in which Monroe helped Ella Fitzgerald get an engagement at the all-white Mocambo Nightclub by phoning the club and telling them that she’d be there at the front table every night. While it seems that the story didn’t concern Fitzgerald’s booking at the Mocambo (several other Black performers had played there before, and Monroe was out of town during those dates), Monroe did indeed help Fitzgerald, her favorite singer, play the Tiffany Club in East Hollywood, and she took a front table every night she could.

Ella Fitzgerald and Marilyn Monroe at the Tiffany Club, 1954.

The two developed a deep friendship, and Fitzgerald herself said about her after Monroe’s death: “She was an unusual woman – a little ahead of her times. And she didn’t know it.”

Marilyn Monroe’s politics have long been hidden away or skimmed over in biographies and studies of her life. I’m not entirely sure why. Perhaps her political activities are antithetical to the Marilyn Monroe people think they know, and the general public would prefer to keep her one-dimensional and easy to digest. But the truth reveals a person dedicated to causes of justice and righteousness, who was not afraid to use her power as a weapon for social change.