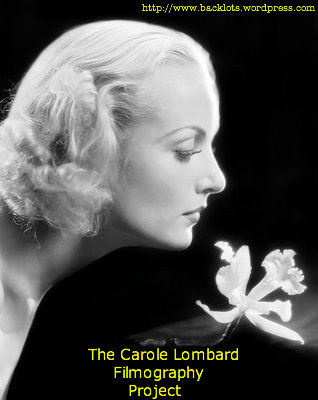 A magnificently crafted screenplay and powerhouse comedic performances by Carole Lombard, William Powell, and Alice Brady are the hallmarks of this beloved zany comedy that is unmatched in its blend of screwball camp and surrealist humor. It has become one of the most respected comedies to come out of Hollywood, and its appeal stands the test of time–the script is just as hysterically funny today as it was in 1936. Its unceasing barrage of witty lines and humorous situations renders the film a difficult one to keep up with, and a real challenge to examine.

Godfrey Smith (William Powell) is out of work, and makes his home at the city dump in the midst of the Great Depression. A socialite by the name of Cornelia Bullock (Gail Patrick) approaches him, explaining that she is in need of a “forgotten man” to complete a scavenger hunt for a party. She offers him $5 if he obliges. Offended, he chases her off, forcing her to trip and fall on an ash pile. Cornelia’s sister Irene (Carole Lombard) is delighted at this spectacle, and she and Godfrey strike up a discussion about the nature of scavenger hunts and the ethics of using human beings as objects in a game (“It’s kind of sordid when you think about it,” Irene says). In order to prevent Cornelia from winning the scavenger hunt, Godfrey offers to be Irene’s “forgotten man.”

The party is chaos, with participants trying to register all their finds at the same time. Amid people showing off items such as spindles, goldfish, and Chinese gongs, Godfrey and Irene emerge and Irene is declared the winner of the scavenger hunt. When Godfrey is asked to make a speech, he calls the entire party a group of “nitwits,” saying that it will be a pleasure to return to the dump. However, in appreciation for his help in her victory, Irene offers him a job as the family butler. He accepts, grateful to have a job.

When Godfrey starts work the next day, he learns the extent of the Bullock family’s eccentricity. Irene has a tendency to throw childlike temper tantrums, which the dizzy scatterbrained Mrs. Bullock (Alice Brady) treats with performances by her live-in protegé, Carlo, which invariably upset Irene even further. The long-suffering Mr. Bullock is having trouble with money, but every time the concept is mentioned, Carlo sighs dramatically and Mrs. Bullock commands the conversation to stop as it’s “upsetting Carlo.” Cornelia is set on revenge against Godfrey for taking away her scavenger hunt victory, but Mrs. Bullock ultimately protects him saying “He’s the first thing Irene has shown any affection for since her Pomeranian died last summer.” Indeed, Irene takes to Godfrey very quickly, in a way that makes Godfrey uncomfortable.

Cornelia, still set on getting Godfrey fired, hatches a scheme to accuse him of stealing her pearls. Godfrey realizes that he has been framed, and begins to hatch a scheme of his own. We learn that Godfrey is not all that he has claimed to be. Raised in a rich, aristocratic family, Godfrey chose to live in the dump to get a taste of how the other half lives. Godfrey’s scheme involved buying stock for the family by taking Cornelia’s pearls and transmuting them into gold, then into stock, then back into pearls. Cornelia got her pearls back, the family’s money troubles were over, and Cornelia had a complete change of heart in regard to Godfrey. He did take some money for himself in order to open a nightclub called “The Dump,” and there he made a name for himself again and married Irene, whose feelings he had begun to return.

As uproariously funny as this movie is, My Man Godfrey is an incredibly difficult piece to analyze. The dialogue is so rapid fire and each line so funny that it is difficult to extract specific bits of dialogue that drive the story forward or provide important information about the characters. The nature of the film is that every bit of dialogue is important, and trying to find a quote more noteworthy than another is an exercise in futility. This is a brilliantly crafted film in every way; from the screenplay to the directing to even the cinematography, My Man Godfrey is a screwball masterpiece. Though Lombard was undoubtedly the star, Alice Brady gives a bravado performance as the nutty mother that nearly steals the show. The moment she shows up at the scavenger hunt party carrying a goat, the character of the mother is established. Speaking in a high, Billie Burke-like voice with a quirky laugh, she plays an essential role in creating the film’s zany quality.

Alice Brady as the mother.

In addition to its status as one of the great screwball comedies of all time, this movie is notable for the unique offscreen relationship of Lombard and Powell. After making Man of the World together, Lombard and Powell were married in early 1931. Their marriage didn’t last long, they were divorced after 2 years, but they remained good friends and worked together wonderfully. In fact, William Powell refused to do the film unless Carole Lombard was cast as Irene–he felt her perfect for the role. Their chemistry is evident in My Man Godfrey, and though they had divorced 3 years earlier, the friendship that they held offscreen is felt by the audience.

There exists a series of outtakes from the set of My Man Godfrey that show the fun atmosphere on the set, and also demonstrate Carole Lombard’s famous love of cursing. It was said that she loved to shock people with her ability to let out strings of 4-letter words, inconsistent with her angelic face and outwardly soft appearance. I am including these outtakes below.

For my first installment to the Summer Under the Stars blogathon, I have the pleasure of reviewing a truly delightful comedy by the name of Libeled Lady. The 5th of the 14 movies movies that teamed William Powell and Myrna Loy, the two possessed all the wit and charm in this movie that they are so widely known for. Add to that the talents of Spencer Tracy and Jean Harlow, and you have yourself a real peach of a movie.

The story deals with a wealthy woman, Connie Allenbury (Myrna Loy) suing for libel after a newspaper article accuses her of breaking up a marriage. In order to counter the suit, the newspaper company hatches an elaborate scheme to make the story true–hiring a notorious ladies’ man by the name of Bill Chandler (William Powell) to woo her and eventually be caught alone with her when his wife walks in. The plan is complicated when the two actually fall in love.

The situation with the wife is a prominent and amusing supporting story. Played by the lovely Jean Harlow, the character of Gladys is the long-suffering fiancé of Warren Haggerty, the managing editor of the newspaper being sued for libel. When the idea is developed and it comes to light that Bill Chandler is not actually married, Warren volunteers Gladys to be the pretend wife for the scheme. Some of the funniest scenes are those in which William Powell and Jean Harlow pretend to be a devoted married couple when there are people around, and as soon as they leave, they are at each other’s throats. William Powell and Jean Harlow were very well matched onscreen, and their good friendship turned to romance in real life. The two became engaged in 1935, and dated for 2 years, despite Powell’s doubts about marrying another blonde movie star after his divorce from Carole Lombard a few years earlier. When Jean Harlow fell ill on the set of Saratoga, it was William Powell who left the set of his own movie in order to take her home. I think had Jean Harlow lived longer, she and William Powell would have become as beloved a screen pairing as Powell and Myrna Loy. However, it is hard to speculate about this, as Jean Harlow died during the filming of Saratoga at the peak of her career in 1937. She was only 26.

One of my favorite scenes is one in which Bill Chandler, pretending to be an expert fisherman in order to get on the good side of Connie’s fisherman father, actually finds himself having to go fishing. Watch what happens:

This is a truly hilarious movie, and if you haven’t seen it yet, you’ll be in for a treat.

Stay tuned for more posts during the month of August dedicated to TCM’s Summer Under the Stars programming!