Readers, I returned to the United States on Tuesday after 2 weeks in Europe, and as my jet lag seems to finally have been conquered, I wanted to write to you about the lecture and the other classic film-related things I did while abroad. It was an absolutely magnificent trip, filled with many wonderful surprises.

My trip began in Oxford, where I stayed at Lady Margaret Hall with a side trip to Bruern, a small town in the English countryside. At Bruern I attended a lovely dinner with Olivia de Havilland’s lawyers and other guests of the lecture, one of whom happened to be a retired British Supreme Court justice. It was fascinating to talk to him about Olivia de Havilland’s case, and the differences between intellectual property law in the US and in Britain. I learned that in Britain, the press is much more legally restrained than in the United States, where the courts tend to do whatever they can to defend the freedom of the press. I also had wonderful chats with Olivia de Havilland’s daughter, Gisèle Galante Chulack, son-in-law Andy Chulack, and other fascinating people from varied walks of life. It was very intellectually stimulating, and I came away from the evening with many new perspectives on law, life, and politics.

Flower gardens of Bruern, near the cottage where I stayed overnight.

The next day, the other guests and I returned to Oxford for the lecture. Gisèle gave a beautiful introduction, after which Suzelle Smith and Don Howarth took the podium to talk about the history of the case. Suzelle and Don are Oxford fellows, and go to Oxford every year to talk about various cases that they have argued. They were proud to show me, too, a gate in front of Lady Margaret Hall that is named for them.

They spoke about the cases that Olivia de Havilland v. FX was based on, including Eastwood v. National Enquirer and Zacchini v. Scripps-Howard Broadcasting, and demonstrated the legal precedents that provided evidence for de Havilland’s argument. As I have noted here before, much of the case was terribly misrepresented in the mainstream press, and huge amounts of corporate money was thrown into FX’s defense. One of the judges on the 3-judge panel at the appellate court had served as legal counsel for NBC, and before being appointed to the appellate court had worked for the same law firm that was representing FX against Olivia de Havilland. Ideally, an appellate court judge would be unbiased, but as we know, the legal system doesn’t always work that way. 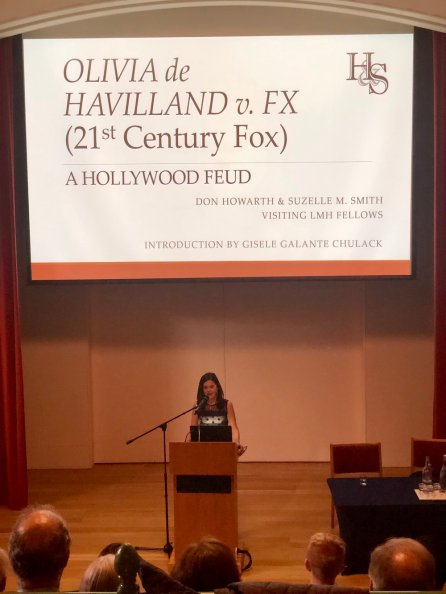 The whole event was warm, positive, and communal. I very much felt like I was part of a family, one of dedicated and passionate people trying to advocate for truth in media and corporate accountability. I am currently in the beginning stages of a soon-to-be-determined project about the case. I’m not yet sure what it’s going to look like, but I will be sure to keep you posted as it progresses.

From Oxford I headed to London, where I spent several days exploring. I discovered that the BFI Southbank was playing Letter From an Unknown Woman during my stay, part of their series of free matinées for seniors. Well…I’m far from a senior, but I was happy to pay the nominal fee for non-seniors to attend what I consider to be one of the screen’s greatest dramas.

Letter From an Unknown Woman tells the story of obsession and rejection in 19th century Europe, with Joan Fontaine playing a girl madly in love with a pianist, whose undying love continues into adulthood. She ultimately finds that the pianist, a charming and uncommitted womanizer played by Louis Jourdan, couldn’t care less about her. If you haven’t seen it, I would highly recommend finding a copy along with a box of kleenex. It was one of Fontaine’s personal favorite projects, and this tragic melodrama shows her acting skill to a tee–as she plays the same character from girlhood through adulthood.

I ended up being the only one there under 80, and I shared the situation with my Twitter followers, as it was simultaneously amusing and par-for-the-course. I received a reply from the proprietor of Knebworth House, Henry Lytton Cobbold, who was rather impressed at someone who would give up an afternoon in London to see Letter From an Unknown Woman. He invited me up to the house to talk about Joan Fontaine, and see some paintings of hers that were there. I decided to go for it, despite the fact that I had a train out of London the next afternoon.

I awoke at 6 AM, arriving at Knebworth House at 8, in order to make the most of my time before heading back to London for my train. What I found was a magnificent 15th century castle, updated in the Gothic style, which has served as a filming location for such major movies as The King’s Speech and Harry Potter and the Goblet of Fire. It has also housed major rock concerts by Led Zeppelin and the Rolling Stones. Henry Lytton Cobbold is the 19th generation to live there, and he is also a filmmaker and devoted Joan Fontaine fan. He knew her well from the 1980s until the end of her life, and she willed him two portraits upon her death. Those are the paintings Henry was inviting me to see.

The portraits were absolutely beautiful, and after we had seen those (and a room full of Joan Fontaine posters), we went through binders of photos, documents, and letters that Henry has in his possession. I interviewed Joan Fontaine in September of 2013, shortly before she died, and this interview was the last one she ever gave. Our mutual connection provided the fodder for much enthusiastic conversation as we pored over Henry’s collection. I could have stayed there an entire week, as we both noted–I was in my element in a way that I rarely experience.

After several hours at Knebworth House, I reluctantly made my way back to London, where I caught a train to Paris. I wanted to write about going to see a film at my beloved Christine 21 Ciné (which I call the “Rue Christine”), my favorite movie theater in the world. I spent many a homesick hour there while living in Paris 8 years ago, losing myself in My Man Godfrey and Mildred Pierce for the price of 3 euros. Sadly, though, the Rue Christine is on a summer schedule and the movies playing during my brief time in Paris didn’t grab my attention. So alas, no Rue Christine this trip. But you can read about my connection to this theater, and the other theaters of the 6ème arrondissement here.

The last few days of my trip were spent with a good friend in the south of France. This friend is a close relative of Marion Davies, and I have become very close to her over the past few years of my research. Together we watched Lights of Old Broadway, the movie I introduced at the San Francisco Silent Film Festival this year. Lights of Old Broadway is a delightful comedy, one of the many early films in which Marion plays a dual role. Here, she plays actual twins, separated at birth and adopted by two very different families–one from the aristocracy, and one from the poor slums of New York. The movie showcases Marion’s skill as an actress, as she plays each twin with really astonishing nuance. One of my favorite aspects of the movie is that the character of Fely, the twin from the slums, is very much like Marion Davies in real life. Anne, the aristocratic twin, is soft and refined, but Marion still inserts just a touch of the real Marion Davies in her, too. It’s a complex interpretation, and Marion’s acting style in this movie really deserves an analysis all its own.

I began my journey home on June 24, and finally arrived home in the afternoon of June 25. It has been a busy, classic film-filled few weeks, and I feel that there is going to be more to do than ever in the coming months. I will be sure to keep you posted on my Olivia de Havilland project, and anything else that comes of this trip.