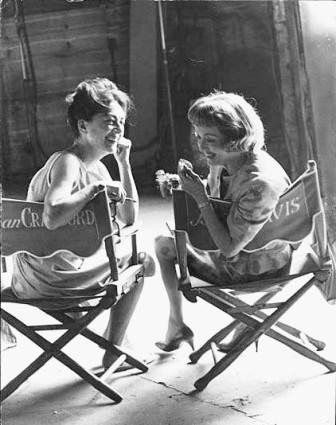 The first season of the FX bio-series Feud came to a close on April 23, capping off 8 weeks of exploration into the famous rivalry between Bette Davis and Joan Crawford. With Jessica Lange as Joan Crawford, Susan Sarandon as Bette Davis, and Catherine Zeta-Jones as Olivia de Havilland, the series had been much anticipated in the classic film blogosphere and we waited on baited breath. Nearly all of us agreed–it had the potential to be either spectacularly good, or monstrously bad.

The evening of the first episode of Feud was an event. Tweets were coming in fast and furious as the episode progressed, with classic film aficionados noting errors as well as praiseworthy moments. Afterward, the reviews came in from fans of Crawford and Davis…and they were mixed. Several of my friends, classic film aficionados with expert knowledge on Bette Davis and Joan Crawford, loved it. Jessica Lange’s Joan Crawford, they said, was flawless. Susan Sarandon found the movements of Bette Davis, a very difficult thing to do. Others found it disrespectful and campy with trite dialogue, featuring such an inaccurate depiction of Olivia de Havilland that it was difficult to see much else.

I have had opinions about Feud from the start, but intentionally held off on expressing them here, because I wanted to wait for the end of the season. But now I feel that I can accurately describe my feelings on the subject.

To understand the context for Feud, it is necessary to understand the context of Hollywood during the studio era. On the set, friendships were not encouraged. Actors were to come to the set to work, and not to socialize with other actors. Studios would manufacture competition in order to make the actors work harder, which frequently led to feelings of isolation and loneliness among those working under the studio system. Given the studio-sanctioned psychological pressure and forced allegiance to the studio at which you were under contract, there was little time to branch out. If you had any time to socialize, it was almost exclusively with people at your own studio. With Bette Davis at Warner Bros. and Joan Crawford at MGM, a feud, as it were, was not present in those early days, nor was a friendship. Bette Davis said it best in her interview with Dick Cavett:

“It really depends on whom you work with. And, you see, we don’t work together very often. For instance, the group of people I knew the most were the people I worked with at Warner’s all those 18 years. And if I had been at Metro, I probably would have known those people much more, because they all knew each other. I don’t think it’s by any intent or jealousy or not wanting to know each other, I think all of those people you’re talking about were very occupied all those many, many years. And it does not leave much time, really, to have a lot of friends.”

Whatever animosity was cultivated later, culminating in the (admittedly fascinating) 1963 Oscars ceremony, was captured and played up in a press that feeds on scandal. Classic Hollywood feuds have long been fodder for magazines, tabloids, and newspaper gossip columns. Scandal sells, and publications have historically stopped at nothing to sell a scandal. But far too often, the feuds are either blown out of proportion or falsified altogether, and lives have been deeply affected by the practice of creating stories out of the lives of real people for the purposes of selling them. The rivalry between Olivia de Havilland and Joan Fontaine is a prime example. The sisters, while always rivals to some extent, had their relationship exposed, magnified, and milked for all its worth for the scandal-hungry press. The media coverage of their sibling troubles ultimately became a self-fulfilling prophecy–the sisters’ ups and downs became more frequent, and they stopped speaking altogether in the late 1970s.

Hollywood fights continue to make for good television and high ratings, so it didn’t come as a surprise to me that FX chose the Crawford/Davis feud for its first season of the show. A common thread among film fans when discussing Feud is praise for the show for bringing classic Hollywood into the mainstream. This is a wonderful objective, but there is a delicacy involved in such a task when the people represented aren’t alive to contribute to it. Respect and dignity for the people’s lives and legacies must be paramount, and my primary concern regarding Feud was the notion of bringing Crawford and Davis into the mainstream by way of a petty catfight.

Bette Davis, at the age of 28, violated her contract with Warner Bros due to unhappiness with the scripts and parts she was offered. She first fled to Canada to avoid legal action, then to Britain to take a 2-film deal. Suing Warner Bros in a British court in order to get out of her contract, Davis challenged Warner Bros on their suspension clauses–that if she didn’t take a film for any reason, she would be put on suspension and have that time added to the end of her contract. Warner Bros lawyers succeeded in making Davis look like a spoiled film star, and she lost the case, with the court ordering her back to Warner Bros to finish her contract. But it was among the first major strikes against the studio system, and Davis’ defiance and bravery in taking on one of the most powerful corporate enterprises in the country case set the stage for Olivia de Havilland to mount a similar case against Warner Bros in 1943–a case she won. 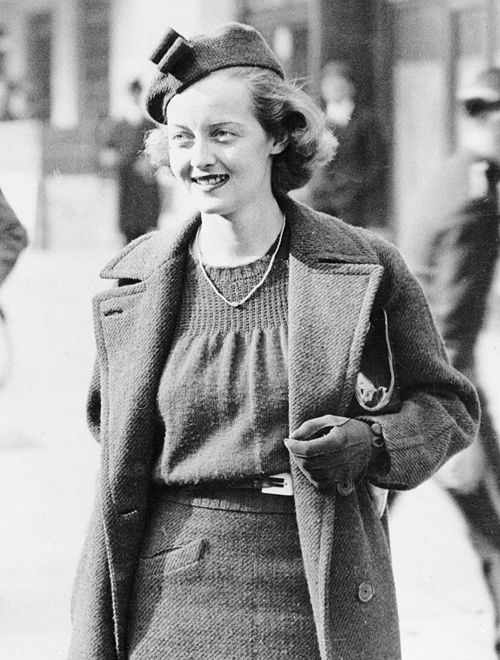 Bette Davis in London in 1936, when she brought suit against Warner Bros.

In 1955, Joan Crawford married Alfred Steele, the CEO of PepsiCo and the man who took Pepsi from a small regional bottling company to monolithic corporate giant. Crawford worked with Steele to bring increased revenue to the company, relocating from Hollywood to New York and traveling all over the country to make personal appearances at Pepsi events. When Steele died in 1959, Crawford discovered that he had left her deeply in debt, except for the Pepsi stock that she had saved, and her image. She was elected to replace Steele’s seat on the Pepsi Board of Directors, and thus became a powerful female executive in the corporate world. 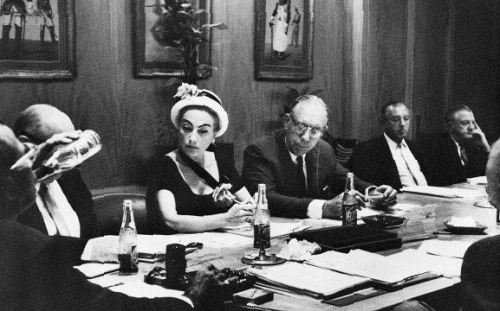 Joan Crawford at a Pepsi board meeting.

While Feud did indeed touch upon these aspects of Crawford and Davis, for which I give the show credit, the focus remained on the fighting. I’m thrilled that mainstream networks are beginning to showcase classic Hollywood and bring it into the mainstream. But especially in our present day, as women find themselves fighting for their rights, I wish the action had centered around their strength, portraying Crawford and Davis as the powerful women they were, resisting the urge for the action to revolve around them as stereotypical, catfighting divas.

15 responses to “On FEUD, Feuds, Bette Davis and Joan Crawford”