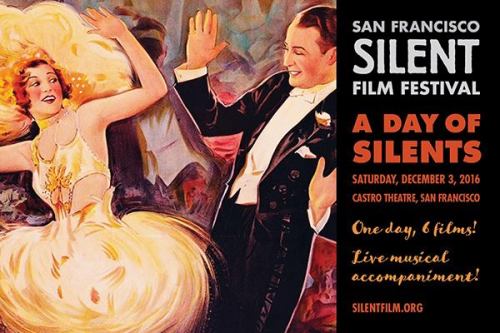 Readers, many apologies for my extended absence. I don’t like to go too long without a post, but having been busy with my Marion Davies work and other outside issues, I find myself having gone for over a month without writing here.

Naturally, it is the glorious San Francisco Silent Film Festival that brings me back. After the main festival event in June, the San Francisco Silent Film Festival has a day of silent movies at the Castro theatre in the winter, to whet our appetites for what’s to come in the summer. The annual Day of Silents this year was held last Saturday, and I am happy to be able to tell you about the day…at least part of it. My day at the Castro was cut short due to the tragic fire in my hometown of Oakland, CA the previous evening. Elaboration on that point will come in a later installment, because it deserves its own post. For now, however, I would like to focus on the movies. It’s been a dark year, and I think we could all use a bit of movie talk.

I managed to see two movies on Saturday afternoon and both were stellar examples of different types of silent filmmaking. The first was a wonderful 1926 Ernst Lubitsch comedy called So This is Paris, a lighthearted tale of rekindled romance between a woman practicing a revealing dance with her performance partner…and the man who comes over to tell her to cover up.

Even this early in his career, Lubitsch was already developing a signature style. The beginning scene with the revealing dance is a beautiful moment of early Hollywood self-awareness, something in which Lubitsch later excelled. The dance the two partners do is very “sheik”-esque, calling to mind the serious acting of Rudolph Valentino–but it is done in a very halfhearted and parodied way, inciting laughter in the Castro audience and undoubtedly in the audiences of 1926. Self-awareness at that level is great fun to see, as only a few far-between silent movies show that the movie industry had a sense of humor about itself. The beginning of So This is Paris and the entirety of Show People are prime examples of Hollywood’s self-awareness, a trope that wouldn’t become frequently employed until much later. 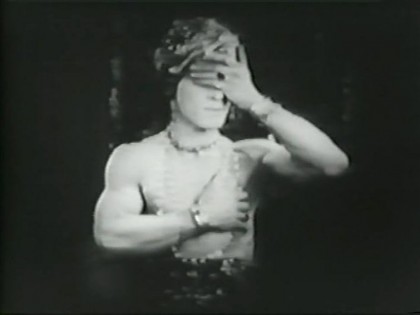 The second movie that I was able to see was Strike, Sergei Eisenstein’s 1925 debut film about a pre-Revolution worker strike. Though it was his first movie, it was already typical Eisenstein. Filled with symbolic and often shocking imagery, it clearly influenced his later Battleship Potemkin, and was quite difficult to watch. Watching Strike and already being familiar with Battleship Potemkin, I came to the realization that one of Eisenstein’s go-to methods of shocking his audience was in showing graphic scenes having to do with children. The famous scene in Battleship Potemkin in which a baby carriage rolls down the Odessa steps is reflected here in similar frightening scenes involving young children, and these serve to set the audience against the villains of the story.

On a related note, I always appreciate the frequent Russian programming at the San Francisco Silent Film Festival. I have a strong connection to Russia, having lived and studied there, but opportunities to speak and read it here in the United States are few and far between, so the movies at the silent film festival offer my brain a much-needed Russian treat.

Sadly, I had to leave after Strike. But I very much look forward to the larger silent film festival in June. Stay tuned, and thank you Day of Silents!

This entry was posted in Lara Gabrielle Fowler and tagged day of silents, San Francisco, Silent Film. Bookmark the permalink.