The Coming of Sound and the First Academy Awards ceremony

At this moment, the film world is busy preparing for its biggest event of the year, when Hollywood’s best and the brightest come together to honor the greatest work done over the past year. It is a tradition so ingrained into Hollywood culture that it is difficult to imagine a time without it, a time when there was no precedent against which to measure the best performance or director or screenplay of the year. Yet the film industry already had more than 30 years of history by the time of the first Academy Awards ceremony, and few could fathom the impact that it would have on the industry and how much one ceremony could change the way we look at film as a whole.

The first Oscars ceremony was held in the Blossom Room of the Hollywood Roosevelt Hotel on May 16, 1929. Tickets were $5 per person, and 15 awards (the winners of which had already been announced) were handed out in front of an audience of 270 people, in a ceremony that lasted 15 minutes. The award given out for Best Picture of the Year, to William Wellman’s Wings, proved to be a significant one–it would become the only film marketed as a silent to win Best Picture for 83 years.

At the time of the initial release of Wings in 1927, the film industry was on the brink of a massive transformation. The Jazz Singer, the first major film featuring synchronized dialogue, exploded onto the screen less than 6 months after the release of Wings, inciting wonder and fascination in the public, worry and fear in theater owners. Proprietors of small theaters wrung their hands over how to afford the transition to sound that seemed to be coming like a tidal wave. Construction of sound equipment would be expensive and prohibitive, and if sound films continued to be as popular as The Jazz Singer was, audiences would flock to the bigger, more lucrative theaters who could afford sound films, and the small theaters would go out of business. This simultaneously exciting and frightening time in the industry provided the backdrop for the years leading up to the first Academy Awards.

The first words of synchronized dialogue in a major feature film, spoken by Al Jolson in The Jazz Singer (1927).

In order to allow small theaters to adapt their theaters with minimal financial impact, most films to be released in sound between 1927 and 1929 had a silent counterpart to be shown in the silent theaters. Nonetheless, even in silent films, the influence of the coming of sound was palpable. Plots were tighter, intertitles appeared more frequently and featured more skillfully written dialogue. Some of the best silent films were released during the era between 1927 and 1929, due to the influence that sound films were having on the public and the response that silent filmmakers had to make to that influence.

By 1929, sound had become industry standard. The silent era had eroded under the pressure of sound, and most theaters had had enough time to renovate their theaters to accommodate sound pictures. Though silents continued in foreign markets and under certain filmmakers (Charlie Chaplin made his final silent, Modern Times, in 1936), sound had taken over as the default method in the United States. And at the dawn of this new epoch of filmmaking came the birth of the Academy Awards.

There was truly no better time for the tradition of the Academy Awards to start than the spring of 1929. The honored films and performances include some of the best in all the silent era–Sunrise: A Song of Two Humans, one of three performances for which Janet Gaynor won the first Academy Award for Best Actress, ranks as not only a giant of the silent era, but one of the most beautifully filmed movies in all film history. Wings, a war drama focusing on aerial combat, employs the magnificent feat of filming from the air, an almost unheard-of special effect in 1927, and the marvel of it holds up even today. 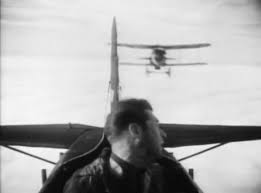 A scene from WINGS, shot from the air.

In 2012, the Academy Awards paid tribute to its past by awarding the Best Picture Oscar to The Artist, the French-American silent collaboration about Hollywood’s transition to sound. It seemed that the circle was complete–though The Artist bears little resemblance to silent films of the past, it was a nostalgic look at what was, and at the same time, a commentary on what is.

Don’t forget to watch the Oscars on ABC tomorrow, at 7 EST, 4 PST!