The San Francisco Silent Film Festival came to a close yesterday, and what a day it was. This was perhaps the strongest day of the festival, with some wonderful comedic fare to lighten the rather serious tone of the festival overall this year.

First up was Max Linder’s comedy Seven Years Bad Luck, in which Linder is destined for seven years of bad luck after breaking a mirror. It is quite a funny movie, and is considered to be one of Linder’s best. It was preceded by another very funny short called Max Wants a Divorce, in which the main character hatches an elaborate scheme to collect his inheritance money (to be given to him only on the condition that he remain a bachelor) after his marriage. Linder was a very skilled filmmaker, and these two shorts show his talent impeccably. 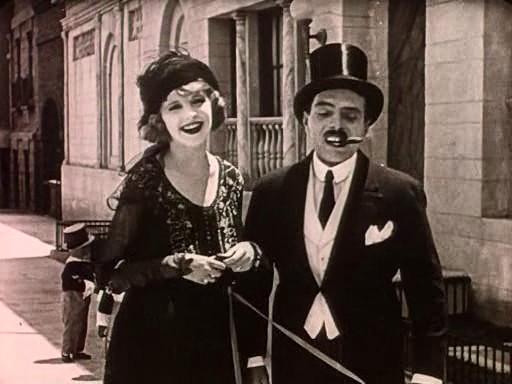 The movie was introduced by Serge Bromberg of Lobster Films in Paris, and he provided a bit of a tragic backstory to the film. Max Linder was beset by severe emotional problems as a result of his service in World War I, and in 1925 Linder and his wife were found dead in Paris , the result of a suicide pact they had made several years before. In addition, Linder’s co-star in Max Wants a Divorce was a woman by the name of Martha Mansfield, who also suffered a tragic death when her costume caught fire while she was on the set of a film. These horrible tragedies are ironic given how funny the movies are, and knowing the fates of the leading actors gave a bittersweet quality to the comedies.

Next up was a very interesting film by the Japanese director Yasujiro Ozu, one of the pre-eminent names in Japanese cinema. Ozu’s films are normally marked by thoughtful examinations of the human condition, with calm, tranquil camerawork and character-driven narratives. This film was completely different. Introduced by Eddie Muller, Dragnet Girl was an American-style proto-noir gangster film, that Muller noted “could easily have featured James Cagney and Joan Blondell as the leads.” It was so American in tone that all the signs were in English, and newspaper articles about Jack Dempsey, who had never been to Japan, decorated the walls. A very unusual film from Ozu, and a reminder of just how much American films influenced foreign markets. It was quite enjoyable, a suspenseful thriller that brought out the best of Japanese filmmaking paired with the most popular American genre of the era.

The Girl in Tails was something quite unusual. Made in Sweden in 1926, it is one of the most distinctly feminist movies I have seen from that era, and even pushes the boundaries for what is accepted today. The story deals with a young girl who wants to go to a ball, but has nothing to wear. Her father has just bought her brother a new coat and tails, but refuses to buy his daughter a new dress, saying she has enough and if she had been a boy, she would have gotten a new tuxedo, too. Deeming this unfair, she gets back at her father by showing up at the ball dressed in a tuxedo–much to the horror of those around her. She is chastised by everyone except for her former schoolteacher, who tells her that she is correct for reacting when she is treated unfairly simply because she is a girl. The movie deals with the aftershocks to her act in the small, conservative town where she lives–with the ending message being that acceptance is important. Its tone was rather shocking, as a movie from 1926 is not expected to be thinking in terms of women’s rights. But this one was, and it was an absolute delight. Artistic director Anita Monga said that this was one of her favorites that was shown at the Pordenone Silent Film Festival in Pordenone, Italy last year, and just had to bring it to San Francisco. I’m glad she did.

The Sign of Four was the only movie in the festival this year that I did not particularly care for. It was a Sherlock Holmes story, and to me not a very thrilling one. I was distracted during the movie, and it did not grab me as it did others. A gentleman I talked to after the movie described it to me as a “guy movie,” a term I generally don’t like because of the gender role reinforcement that it carries. But I see what he means, and indeed, nobody in the group of women I was sitting with liked the movie–while the group of men sitting below us felt it was one of the best films of the festival. If I could live yesterday over again, I would have left before Sign of Four and come back for Harbor Drift, the next film on the program. But alas, I left for a dinner break during Harbor Drift, and did not get to experience what was by all accounts the best event of the festival. It was another German melodrama, but everyone I talked to said it was an immensely well-made film, and counted it as one of, if not their number 1, favorite. A mistake on my part, and I will know for next year that dinner should be had between films, lest a gem be missed.

The final film of the night, and of the festival, was the Buster Keaton classic The Navigator. As is standard for Keaton films, the theater was filled to the brim with enthusiastic fans and silent film novices. There was nary an empty seat to be seen, and with good reason. The film is incredibly funny. It deals with a young man and his fiancee (he hopes) on a boat off the coast of an island inhabited by cannibals, and they have to do what they can to avoid them. One of the funniest moments of the movie is when Buster’s fiancee-to-be throws a painting of the boat’s former captain (the painting is clearly Donald Crisp, the co-director of the movie) out the window, but it latches onto Buster’s porthole and Donald Crisp’s face peers in at Buster. It is a brilliant film, and Keaton described it as one of his two favorites, alongside The General.

And that’s a wrap for this year, folks! Thank you so much for reading, and I’ll be back at the San Francisco Silent Film Festival next year for more coverage!