I have just received confirmation that for the second year in a row, Backlots will have the honor of providing official press coverage for the TCM Classic Film Festival, April 10-13 in Hollywood. The TCM Classic Film Festival is perhaps the biggest festival focusing on classic films in the country, and one that is very highly anticipated throughout the classic film community.

Over the span of four days, film fans have the opportunity to attend screenings at such historic locations as Grauman’s (now TCL) Chinese Theater, the Egyptian Theater, the Pantages and the El Capitan, hear panel discussions with key figures from the classic film era, and mingle with other classic film devotees. It is truly the experience of a lifetime, and I have been lucky enough to witness it firsthand.  I am honored and privileged to be able to repeat that experience.

Some of the highlights of this year’s festival will include guest appearances by Maureen O’Hara (whom your author had the pleasure to meet in Ireland a few years ago), Richard Dreyfuss, Mel Brooks and Margaret O’Brien. Jerry Lewis will be getting his hand and footprints cemented at Grauman’s Chinese Theater, and TCM will also be honoring the music work of Quincy Jones. 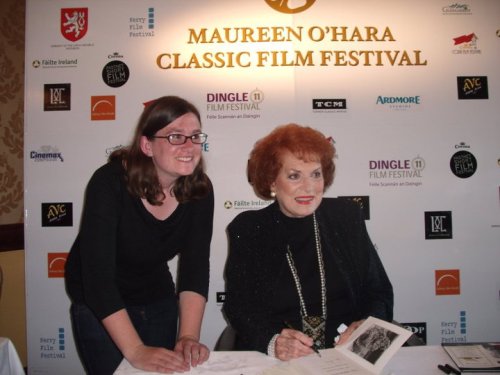 With Maureen O’Hara in Glengarriff, County Cork, Ireland in June 2011.

As this year is the 75th anniversary of that phenomenal year 1939, the festival will include screenings of Gone With the Wind, The Wizard of Oz, and many more screenings from 1939 and beyond to be announced in the near future. The much-anticipated red carpet opening night event will be a screening of a newly restored version of the musical classic Oklahoma!, with Shirley Jones in attendance.

As usual, I will be making a post at the end of each day, outlining that day’s unique and exciting events. I will also enable a live Twitter feed on the blog, and will be updating social media frequently throughout the festival.

For those of you in the Los Angeles area, or those willing to come to the area, there are still passes available. Check out the festival website for all the updates! If you are unable to get a pass, TCM also sells individual tickets for screenings the day of. The website also features the latest announcements and news, as well as an extensive Frequently Asked Questions page and an extensive list of places to stay in Los Angeles.

I hope to see you there!

16 responses to “Backlots at the 2014 TCM Classic Film Festival”