Scott Fivelson’s DIAL L FOR LATCH-KEY and NEAR MYTH: THE OSKAR KNIGHT STORY 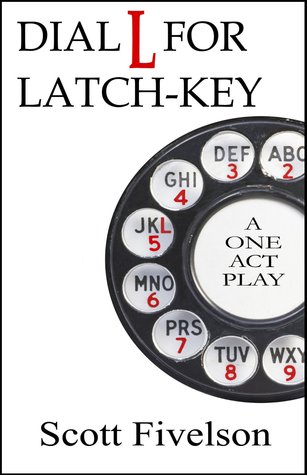 A few days ago I was approached by the multi-talented Scott Fivelson, who brought to my attention two quite interesting works that he thought, accurately, would be of interest to readers of Backlots. The first, a satirical one-act play entitled Dial L for Latch-Key, fits squarely in with Backlots’ very popular Hitchcock Halloween blogathon, and the second deals with classic film in a unique way that I know my readers would find interesting. So thanks to Scott for bringing these things to my attention so that I may inform you, the reader!

Somewhere between Alfred Hitchcock and Monty Python lies the new one-act play by Scott Fivelson, Dial L for Latch-Key, a satire evoking both the suspense of an Alfred Hitchcock film and the humor of an eccentric British comedy. Rife with cultural references that will thrill devoted fans of Hitchcock (and Fivelson even throws in some Monty Python for good measure!), Dial L for Latch-Key is a quirky farce that is a delight to experience.

The play gets its name from the 1954 Alfred Hitchcock suspense film Dial M for Murder starring Ray Milland and Grace Kelly. It is one of Hitchcock’s more unusual ventures, and one of my personal favorites. Fittingly, many plot points from Dial L for Latch-Key are reminiscent of the film, but with zany, slapstick dialogue that could be out of a 1970’s British comedy.

The trailer for Dial “M” for Murder

The play has been performed several times in the United States and England notably at Upstairs at the Gatehouse Theatre in Highgate Village, London, the New End Theatre  in Hampstead, and at the Phoenix Theatre in San Francisco, CA. It has also been broadcast on the radio in several cities, and is currently available in print and audiobook formats. Check it out here. It’s a lot of fun!

The second thing Scott brought to my attention is a film that is in post-production called Near Myth: The Oskar Knight Story. It tells the story of director Oskar Knight, and what attracted me to this particular work is the fact that it features several high-profile stars from the film world including the legendary Margaret O’Brien, who provides testimony on what it was like to work with Knight. O’Brien, beloved by many Backlots readers, continues to be active in the classic film community to this day, and will make an appearance at the TCM Classic Film Festival this year. Near Myth: The Oskar Knight Story will be her first film appearance in several years. Stay tuned for announcements about the release of the film! You can follow them on their Facebook page or by visiting IMDB.

Margaret O’Brien, one of the stars of Near Myth: The Oskar Knight Story, dances with Judy Garland in Meet Me In St. Louis.

Thanks for reading, everyone, and I’ll see you next time!

One response to “Scott Fivelson’s DIAL L FOR LATCH-KEY and NEAR MYTH: THE OSKAR KNIGHT STORY”