THE CARDBOARD LOVER (1928)–A Rare Treasure

The preservation and cultural permanence of silent film is a very pertinent topic in the film community right now. Before the advent of VHS, DVD, and home video players, filmmakers had no reason to think that their films would ever be seen again after their run in the theaters was finished. Many great movies ended up carelessly shelved or worse–ended up in the trash can and destroyed. A recent estimate gauged that nearly 90% of all silent films have been lost.

We are extremely lucky that The Cardboard Lover, a truly delightful piece of comedy that has sadly been much neglected, survived at all. It has become a rare film, accessible only in private collections and university archives, and is in desperate need of a restoration. To my knowledge, it has never been shown on TCM.

And what a shame that is. The Cardboard Lover is a clever, well-written comedy in which the primary showcase is Marion Davies’ significant comedic flair. It features a tight plot and solid acting from all the necessary parties, and several subtle gags for which the viewer has to be on the lookout at all times! 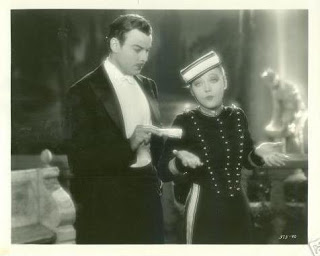 One of Sally’s elaborate gags, dressing up as a bellboy in order to better stalk her tennis player!

Marion Davies plays Sally, an American visiting Monte Carlo whose main interest is in stalking a tennis player (Nils Asther) with whom she has become enamored. The rather oblivious tennis player doesn’t seem to realize her crush on him, but when he decides to look for a fake love interest to get back at his two-timing fiancee (Jetta Goudal), she persuades him to hire her. Hilarity ensues with several cases of mistaken identity and, of course, Marion Davies’ spot-on impersonation of the fiancee toward the end of the film.

The Cardboard Lover was made during a watershed time for Marion Davies. After many years of what she considered to be “stuffy” costume dramas at the bequest of William Randolph Hearst (her boss at Cosmopolitan Productions as well as her live-in romantic partner), Marion finally got to show a glimmer of her comedic gifts in The Red Mill in 1927, and the following year she made The Patsy in which she exudes an almost screwball comedy-like energy. It was her greatest role to date. The Cardboard Lover immediately followed, and Marion’s excitement at being able to play comedy is almost palpable. She concluded the year with Show People, making 1928 perhaps the single best year for Marion Davies. It was also marked her final year in silent films, and it was only fitting that she should go out with such a remarkable group of movies.

Show People, the movie that immediately followed The Cardboard Lover.

Many classic film fans will recognize the title and plotline of The Cardboard Lover. It was remade with Norma Shearer and Robert Taylor in 1942, but with several plot differences so as to make it a unique production. Interestingly, Norma Shearer was somewhat of a rival to Marion Davies while they were both working on the MGM lot in the 1920’s and 1930’s, both having connections to two of the most powerful men on the lot. Norma was married to Irving Thalberg, head of production, and Marion was living with William Randolph Hearst, head of Cosmopolitan (which had merged with MGM in 1924). They vied for several roles, the most important of which was perhaps that of Marie Antoinette, a role that Norma eventually played in 1938.

An interesting trivia bit highlights The Cardboard Lover–early in the film we are introduced to a spritely character by the name of “Peppy.” “Peppy” is played by Pepi Lederer, Marion Davies’ niece and older sister of screenwriter Charles Lederer. The daughter of Marion’s sister Reine, Pepi was an aspiring actress who was greatly supported by Marion, but her troubled personal life hindered any success she may have achieved. She became addicted to drugs and alcohol and was eventually placed in a psychiatric ward by Hearst and Marion to cure her addiction. She committed suicide in 1935. A sad end to a light that shone quite brightly in The Cardboard Lover.

The Cardboard Lover is available through the UCLA Film and TV Archive, but it is missing a score. As mentioned above, it is in desperate need of restoration. Though work is being done to preserve these beautiful films, we have a long way to go in making people aware of just how magnificent they are, and how much attention they need. The Cardboard Lover is a prime example. I would love to see it shown at a film festival, it’s a real crowd-pleaser and a wonderful testament to the gifts of Marion Davies and the entire cast.