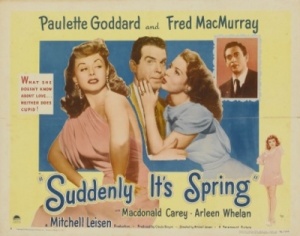 A hysterically funny screwball comedy about a female marriage counselor in the army who is going through a divorce with her own husband, Suddenly It’s Spring has been the #1 highlight of the festival for me thus far. I was very excited to see it, as it was the sleeper hit of the TCM Classic Film Festival this past year and I missed the screening there. It was the talk of the festival, and left many wondering how it is that this movie is not more widely known. It does not have a DVD release, nor is it available (to my knowledge) on VHS.

The movie stars Paulette Goddard, one of my favorite actresses, paired with Fred MacMurray, one of the most versatile actors of the 1930s and 1940s. Fred MacMurray has played screwball comedy, drama, and noir with equal flair, and in this movie he plays the perfect clueless husband in a great comedic performance.

Paulette Goddard is a very interesting actress. In the 1930s she had a reputation for playing strong, rjch, well-defined roles such as the sassy dame Miriam Aarons in The Women, and the orphaned gamine in Modern Times with Charlie  Chaplin. She starred with Chaplin again in 1940 as the Jewish girl caught in the throes of a familiar-sounding anti-Semitic dictatorship in The Great Dictator.

Goddard in The Great Dictator.

(To digress a bit, Charlie Chaplin was commonly known to be married to Paulette Goddard. The public knew nothing of the circumstances of their marriage, and to this day there exists no definitive proof that they ever were married. Chaplin referred to Goddard once as his wife, but neither of them discussed their marriage publicly to the press. It remains a topic of contention among classic film aficionados, though the general consensus is that they were indeed married.)

In Suddenly It’s Spring, her role is strikingly less defined than the films she made in the 1930s and early 1940s. She plays a generally calm and ordinary housewife, with conflicting emotions about divorcing her husband that come out in very funny ways. In one scene, as her husband tries to drive her away at the bequest of his current girlfriend, he starts acting like a drunken buffoon, scaring away her army friends who are paying a visit. When the ladies leave, she looks at him and basically throws herself at him, saying she has never been so attracted to him as when he acts that way. It is a classic screwball moment, and it got a huge laugh from the Cinecon audience.

Another interesting side note–the role of Paulette Goddard’s mother in the movie is played by none other than Lilian Fontaine, the mother of Joan Fontaine and Olivia de Havilland. I was very pleasantly surprised to see her name in the opening credits. Though she appeared in several films, this is the largest role I have seen her play. She has a lovely, lilting voice, and looks remarkably like her older daughter Olivia, with many of the same mannerisms. I recently wrote a post about her relationship with Joan, click here to see it!

This was by far the best movie I have seen yet at Cinecon this year, and perhaps last year as well. I regret that there are very few stills that exist of this movie. I wish I could share them on this post, but they are just not there to share. My wish for this movie is that it can be more widely seen, and perhaps Universal (who owns Paramount, the distribution company) will recognize its appeal and put it out on DVD.