As a precursor to the official festivities of the TCM Classic Film Festival beginning tomorrow, members of the media were invited to a special press roundtable at which we could ask questions of relevance to our readers. The panel, consisting of TCM premier host Robert Osborne, head of programming Charlie Tabesh, and weekend and daytime host Ben Mankiewicz, allowed the press to get an insider’s view of what goes on at TCM behind the scenes.

Robert Osborne answered questions first. He discussed the importance of the diversity of programming that is one of the cornerstones of TCM, and also mentioned that though he was well aware of the youth demographic and the many classic film fans under 30, the enthusiasm of younger viewers came as a surprise to the rest of the TCM team. “They thought it was only for people with gray hair,” he said. What did come as a surprise for him was how fans seem to find their niches at these TCM events. On the cruise, he said, people had divided themselves into groups and organized themselves according to fandom–for example “The Bogart fans are going here, the Cagney fans are going here, and the Stanwyck fans are going here.” He also went into a bit of the process of choosing films for scheduling, and how he works with the guest programmers that appear often on TCM. He is especially impressed with Cher and her choices for the “women in film” lineup that she is programming, saying that she is not a diva at all and is very accommodating and lovely to work with. “Kind of disappointing!” he joked.

Next was Charlie Tabesh, who expanded upon Osborne’s remarks regarding programming. In response to a question about requests for films to be shown, Tabesh stated that they will go to the message boards and see where the interest is. Regarding the oft-pondered question “What is a classic?” in regard to programming, he responded with the general consensus that there is no definition. Programming is based around context, and he gave the example of Katharine Hepburn as Star of the Month. They wanted to show every single one of her movies, and as Hepburn’s career extended far beyond what many consider to be the classic era, they ventured outside of what they would usually program on TCM.

My question was in response to a complaint I often hear from classic film fans in Europe who are disappointed with the programming on the TCM worldwide branches. I asked if they were in contact with one another and if there was any way that the diversity of programming that Robert Osborne had talked about earlier could be transferred to TCM worldwide. The answer came back that copyright laws are different in different areas, as are the values and desires of viewers. Though they are indeed in contact, they understandably don’t have a say in what is programmed, so regardless of what American TCM might hold as a value, TCMs worldwide can make their own choices. 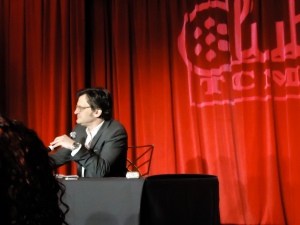 Ben Mankiewicz answered questions about his input at TCM. He said that above all, he is an employee and doesn’t have too much say, though he is welcome to make his own suggestions. In response to a question about his changed appearance (now appearing clean-shaven and well-dressed as opposed to his former casual attire on the channel), Mankiewicz told an amusing story about how his contract initially stated that he had to keep a goatee at all times. When he expressed a desire to shave it off, the powers-that-be asserted that it was not in the contract at all and that he could do it! So now he appears in the way that he wants to present himself. He also remarked on the real community that TCM fans feel with one another, and how the internet has sparked a phenomenon in classic movie fan community. As an example, he cited #TCMParty, the Twitter hashtag that has united classic movie fans on the site, all watching TCM at the same time. He also remarked on the loyalty to the channel that is unmatched–he has a love for sports and ESPN, he said, but doesn’t feel any kind of loyalty or community with it. TCM fans are special that way, he said–there is no other channel that can inspire this kind of enthusiasm and energy from the fans.

Beautifully said, and absolutely true. I can’t think of one other channel that has this kind of united following.

The festival begins tomorrow afternoon. I have enabled live tweets, and you may follow along on Twitter as well as on the blog. It promises to be a very exciting few days!