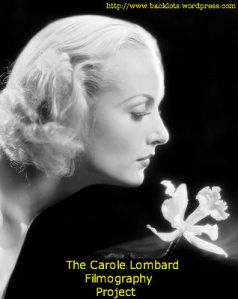 Well, readers, it sure has been a while since my last entry in the Carole Lombard Filmography Project. I watched this film quite some time ago in anticipation of this post, and somehow time slipped out of my hands. Here I am, a shameful number of weeks later, finally giving Carole and this film the attention they deserve. From now on, I will try my hardest to keep Carole current!

Our film today is an important one in the career of Carole Lombard. By 1934, Carole’s star was quickly rising. She had made a number of high caliber dramatic films in the early 1930’s, including Virtue (1932), No Man of Her Own (1932) and Supernatural (1933), but at this point in her career Carole’s tremendous comedic talent was virtually untapped. A semi-comedic role for Carole in We’re Not Dressing earlier in 1934 was a rather pithy introduction to the world of comedy, but Twentieth Century was the film that marked Carole’s first real foray into the comedic roles worthy of her gifts.

Carole plays Mildred Plotka, a lingerie girl plucked from obscurity to star in a play by Oscar Jaffe (played by John Barrymore), a Broadway producer who is convinced she has acting talent. He has renamed her Lily Garland, and is determined to groom her to stardom. Jaffe is a bit of a tyrant as a director, and at one point jabs Lily in the behind with a safety pin in order to get the scream he wants out of her character during a particular scene. Eventually Lily does become a star, and she and Jaffe collaborate on many successful productions, becoming a veritable theatrical duo. In addition, they begin to fall in love.

Jaffe’s tyrannical nature is evident in their personal as well as professional life, and after 3 years Lily has had enough. She tries to break it off with him, but he promises to be better and she stays. However, Jaffe’s obsession with control is too strong and instead of backing off, he has her phone tapped. This is the last straw for Lily, and she leaves for Hollywood to become a movie star.

Without Lily, Jaffe’s plays flop. He begins to sink into financial ruin, and in order to avoid being jailed by his creditors, he dons a disguise and gets on the Twentieth Century train to escape them. Unbeknownst to Jaffe, Lily gets on the train with her new boyfriend at a later stop. When Jaffe finds this out, he schemes a way to get her to sign a contract for a new play, thereby solving his financial problems. A series of misadventures occur aboard the train while Jaffe schemes, and ultimately he cons Lily into an agreement by pretending to be dying.

Along with It Happened One Night (1934), Twentieth Century is considered by many to be the prototype for what would become screwball comedy. The elements are all present–a dotty woman, somewhat bumbling man, and a plot that twists and turns at every corner. The movie is directed by Howard Hawks, who would go on to direct such masterful screwball comedies as Bringing Up Baby (1938) and His Girl Friday (1940) and become one of the genre’s foremost masters. The performances in Twentieth Century are brilliant all around, Carole Lombard shows all the comedic flair that was the hallmark of her later performances, and John Barrymore essentially steals the show with his outwardly controlling yet ultimately rather silly Jaffe. Barrymore’s loose and zany body language is really something to watch in this movie. He, much like Carole Lombard, also had a flair for comedy, but unfortunately this talent of his was never realized the way Carole’s was, as his career suffered a steep decline a mere 3 years later.

Carole was known for being a very easy and pleasant actress to work with, and she kindled a lovely friendship with John Barrymore during filming that lasted for the rest of their careers. When Barrymore’s career was in jeopardy due to debilitating alcoholism and a steadily decreasing ability to remember his lines (possibly a case of Alzheimer’s Disease, virtually unknown at the time), Carole personally requested that Barrymore play opposite her in True Confession (1937), giving his career a much-needed boost. Barrymore died in May of 1942, just 5 months after Carole’s death in a plane crash.