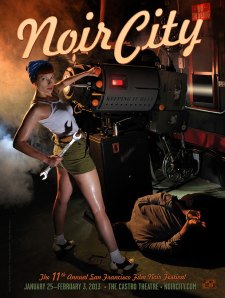 Noir City’s tribute to Peggy Cummins continued this afternoon with showings of 2 films she made in 1957. By this time, Peggy was primarily making films in England, and though neither Hell Drivers nor Curse of the Demon is strict film noir, they both showcase Peggy’s marvelous acting and are prime examples of postwar British cinematic technique.

Hell Drivers features a highly recognizable cast, including Sean Connery, Patrick McGoohan, and Herbert Lom in addition to Peggy Cummins. The story of an ex-con (Stanley Baker) named Tom who takes a job as a gravel truck driver, only to have a clash with the lead driver (Patrick McGoohan) and uncover a money scam, the movie has developed a bit of a cult following among British cinephiles. Though rather minimalist and slow-moving, with most scenes taking place in or around the trucks, there is some truly skilled filmmaking, and the editing is particularly noteworthy. In one scene toward the beginning, when Tom is learning to drive the truck for the first time, his brakes fail and the truck is nearly thrust into traffic. Director Cy Endfield organized a series of very quick cuts as the truck heads into the traffic, forcing the audience to feel the panic and fear of the situation. At this moment, the entire audience audibly gasped–a clear sign of an effective conveyance of emotion.

Hell Drivers was produced by the J. Arthur Rank Organisation, one of the most prolific British film companies of the postwar era. The Rank Organisation had a major hold on British filmmaking, owning most of the major studio complexes including Pinewood and Denham (bought from Alexander Korda in the late 1940s), and 650 individual movie theatres throughout Britain. The introduction to Rank films has become almost synonymous with British cinema, and has been parodied numerous times in popular culture.

In the video below, fast-forward to the 5:00 mark to see a well-known parody of the J. Arthur Rank introduction.

While Hell Drivers represents pure British cinematic technique, Curse of the Demon is an example of how postwar Britain did B-movies. A campy horror spectacle, it employs aspects of witchcraft and ancient Druid legend to a story about an American psychologist who comes to England on business and receives a demonic hex. Aside from Peggy Cummins, the other prominent member of the cast is the legendary Hollywood actor Dana Andrews, whose career by this point had taken a turn toward the B-picture business. The director, Jacques Tourneur, was a good friend of Andrews’ , and Curse of the Demon was a great help to Andrews’ faltering career. It was received well by critics, and the audience at Noir City thoroughly enjoyed it tonight. Though the special effects are clearly low-budget and the modern methods of producing fear in an audience wouldn’t be honed until almost 30 years later with The Exorcist, there is certainly no lack of startling and terrifying moments in Curse of the Demon. The audience delighted in the camp and suspense of the story, and judging by the applause, laughter, and gasps, it was a definite hit.

Peggy Cummins was in the audience again today, and again got a standing ovation. I commented to a friend yesterday that one of the things I love about San Francisco culture is that audiences are extraordinarily cultured and well-read, and when celebrities appear at events, they are truly treated as stars. They get standing ovations, enthusiastic applause, and deep respect from San Francisco audiences, and owing to that, the city sees many celebrities coming back again and again, to be greeted with the same warm and enthusiastic greeting that met them the first time. San Francisco treasures its stars, and in turn, they treasure us.

Tomorrow’s lineup is a spectacular double feature dealing with showbiz noir. Repeat Performance is at 1:00, 5:00, and 9:10, and Billy Wilder’s unparalleled classic Sunset Boulevard at 2:50 and 7:00.

2 responses to “NOIR CITY Day 2 Matinée: “Hell Drivers” and “Curse of the Demon””