On December 19, the Film Noir Foundation put together an early holiday gift for fans of film noir. In celebration of the season as well as the release of the official schedule for Noir City in January, the foundation held a showing of two noir-related films at the Castro Theatre in San Francisco. The first, Holiday Affair, is more in the spirit of the season while Lady in the Lake is a textbook noir–with a twist.

Holiday Affair stars Janet Leigh as Connie, a young war widow who meets and falls in love with Steve (Robert Mitchum), a toy salesman, despite being affianced to Carl (Wendell Corey), a rather straight-laced lawyer. Her young son much prefers Steve, and this puts a further strain on the relationship between Carl and Connie. It is clear that Carl is a good soul, but he is ultimately powerless to stop that which is going on between Steve and Connie.

In an introduction given by Eddie Muller at the start of the film, Muller noted that this movie was chosen due to its holiday theme as well as the casting of Robert Mitchum as Steve. Mitchum was a very versatile actor, but especially beloved for his work in film noir. In Holiday Affair, however, he shows off his comedic skill.  The movie would be classified as a romantic comedy above all, with solid performances by all involved but especially noteworthy is Gordon Gebert, the 8-year-old child actor who plays Connie’s son. Gebert shows an unusually wide range of emotion throughout the movie, and ends up being the driving force behind the whole story. After the film ended, Eddie Muller provided an update on Gebert–he is still with us, and currently the professor of Architecture at City College of New York.

Gebert with Robert Mitchum in the film.

After a brief intermission, Muller got up to introduce the second feature of the evening, an unquestionably noir thriller entitled Lady in the Lake. Starring Robert Montgomery and Audrey Totter, this story about a detective turned writer who gets involved in a murder mystery is one of the most experimental movies of the 1940’s. Montgomery, both star and director, decided to film the entire movie from the perspective of the main character, which paves the way for some very creative cinematic choices–including, most interestingly, the fact that the only time we ever see Montgomery’s character is through his reflection in the mirror. In addition, there are some very dramatic and action-packed scenes that normally would be helped along with corresponding music, but Montgomery preferred to let the scenes speak for themselves–Lady in the Lake has no musical score.

Despite these cinematic novelties and my enthusiasm for the film, the shaky camera work made for a laborious movie-watching experience. I often found myself looking away so as not to get dizzy. To be fair, Montgomery was not primarily a director, and it would be unfair to compare his work on this film to that of veteran directors of the same era. The ideas were all there, but the film could have benefited from some ironing out by an experienced director. Indeed, upon the initial release of the film, the New York Times film critic wrote:

“In making the camera an active participant, rather than an off-side reporter, Mr. Montgomery has, however, failed to exploit the full possibilities suggested by this unusual technique. For after a few minutes of seeing a hand reaching toward a door knob, or lighting a cigarette or lifting a glass, or a door moving toward you as though it might come right out of the screen the novelty begins to wear thin.”

Still, it was wonderful to see the movie after hearing so much about it, and the entire evening was great fun.

Backlots will be returning to Noir City for the full festival in January, so stay tuned for more coverage! 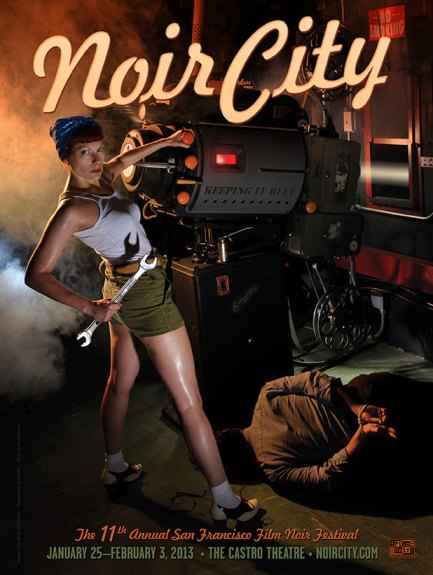