The Artistic Appeal of “Marjorie Morningstar” (1958)

Marjorie Morningstar marks the sole meeting of two great stars from very different worlds. Gene Kelly, the musical genius from MGM, plays older lover to former child star Natalie Wood, here in her first adult role. They seem an unlikely pair, but once the plot gets underway, it is clear that the combined magnetic talent of these two legends is enough to power any movie forward.

18-year-old Marjorie Morgenstern (Natalie Wood) is coming of age in a rather normal way, dating steadily and fantasizing about becoming an actress, much to the chagrin of her traditional Jewish parents. After rejecting a marriage proposal from her beau, she takes a job with a friend at a summer camp for little girls “across the lake from a camp with big boys,” as her friend, Marcia Zelenko, puts it. They sneak over to the other side of the lake one night, and there she meets a dapper and handsome stage director by the name of Noel Airman (Gene Kelly) who charms Marjorie immediately with his talent for all aspects of the theatre. Renaming her “Marjorie Morningstar,” he offers her a number of odd roles in the current production, and in time, Marjorie begins to fall in love with Noel. Though he claims to feel the same way it becomes clear that Noel’s past experience with girls has left him bitter and suspicious of girls with dreams of the theatre. His treatment of Marjorie borders on cruel and manipulative, but Marjorie is so taken with him that she takes no notice.

Meanwhile Wally, a young man who works in Noel Airman’s show, has fallen for Marjorie. She shuns his attention because of her devotion to Noel, but later when Noel begins to have problems with depression and drink, Marjorie learns that he has been seeing another girl and leaves him. She shows up to audition at the theater where Wally is putting on a play and gets the part. When she learns that her success is due to Wally’s love for her instead of her skill as an actress, she expresses gratitude but turns it down, with a kiss and a goodbye to Wally.

At the marriage of her old friend Marcia Zelenko, Marjorie catches a glimpse of Noel, who confides to her that he only showed up to talk to her. He and Marjorie have a passionate scene in which they reconcile, but after the failure of Noel’s next play, he disappears from Marjorie’s life. She tracks him down in London but instead of pursuing him once again, she chooses to shift her attention to Wally, who has shown up in London to meet her.

Marjorie Morningstar is classified as a melodrama, and it definitely lives up to its classification. There are scenes of intense angst, particularly the scene where Marjorie finds Noel with another woman, and this drama clearly shows the range of both main actors. Gene Kelly is especially noteworthy in these scenes, as he is very much playing against type.

Kelly was a magnificently multi-talented personality. He excelled at drama, comedy, and musicals, and felt equally at home behind or in front of the camera. His talents seemed to know no end, and whether directing, producing, choreographing, dancing, singing, or acting, Gene Kelly was the best there was. However, audiences up to this time were used to seeing him in musicals. Though there are a few songs here and there in Marjorie Morningstar (notably “A Very Precious Love,” sung by Kelly toward the beginning of the film), the film generally pushes aside his musical abilities and instead focuses on his ability to play drama. The only time we see him dance briefly in the film is during rehearsal of a number for the show–and there we get a glimpse of classic Kelly.

Natalie Wood, by contrast, does have an extended dance sequence. In her first role for Noel Airman, Marjorie plays a Spanish dancer who transforms her Spanish dance into a modern 1950’s number. Natalie Wood was not known for her abilities as a dancer, but she was famous in the industry for her sky-high IQ and ability to learn unusually fast. Her abilities as a dancer were likely honed on the spot, and her apparent talent is a pleasant surprise. She is nimble, confident, and a joy to watch in this number.

Natalie Wood as Marjorie in the dance sequence.

The film is shot in Eastmancolor (billed as “Warnercolor,” a form of Technicolor popular in the 1950’s), and the film is in desperate need of a restoration. Given the amount of skips, pops, and crackles that continue throughout, it seems as though the print hasn’t been touched in decades. Regardless, the color is absolutely breathtaking. I think this movie would be a wonderful candidate for restoration, because if the color is already this beautiful, I can only imagine what could happen with a little bit of work. This could become a visually stunning piece of film. 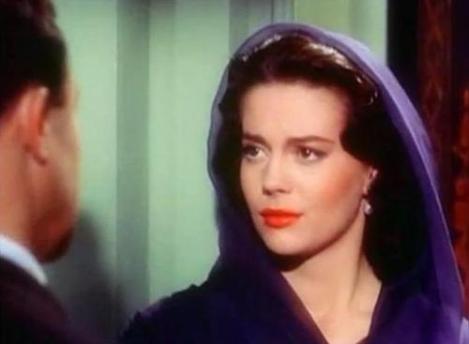 Marjorie Morningstar is, in some ways, rather groundbreaking. Uniquely touching and original in its own right, it is also notable as one of the first films to explore the life of a Jewish family without direct reference to their Judaism. Though the thematic elements of The Jazz Singer (1927) were also strongly tied to Judaism, the difference lies in the fact that The Jazz Singer defined the characters primarily by their Jewishness, while the characters in Marjorie Morningstar are defined by their personas instead of their religion. In fact, the word “Jewish,” or any of its derivatives, is not mentioned once. Instead, the family’s religion is evidenced through their activities, specifically Marjorie’s younger brother having a bar mitzvah and a very elaborate Passover dinner scene.

4 responses to “The Artistic Appeal of “Marjorie Morningstar” (1958)”