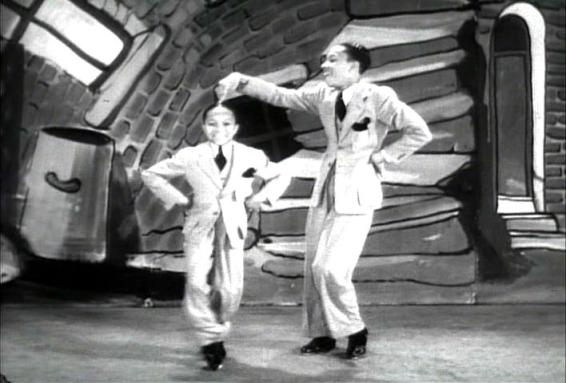 The Nicholas Brothers in their “Lucky Number” dance routine.

As of 7:00 this evening, Cinecon is officially underway. The festivities started with a great last-minute surprise–a Nicholas Brothers short that had not been listed in the program came on the screen, and two women came up and did the entire routine with the taps perfectly in sync. At first I thought it was just meant to show off a foley effect, but after the routine was over, Cinecon president Bob Birchard introduced the women as “the Nicholas Sisters.” We had been watching the granddaughters of Fayard Nicholas, one half of the famed child prodigy dancing duo, dance along to a clip that their grandfather had made 80 years ago. It was a wonderful thing to watch, and a lovely addition to the schedule.

The regularly scheduled programming began with “Artistry in Rhythm,” a Stan Kenton musical review starring Anita O’Day and a few sister acts along with Stan Kenton and his orchestra. It was a very simple, basic review, lasting no more than 10 minutes and specifically spotlighting the talents of Anita O’Day. For what it was, it was good and it worked as a nice introduction to Always a Bridesmaid.

All right everyone, so anyone who knows me well knows that I absolutely ADORE The Andrews Sisters. When I was a kid, people would ask me what my favorite band was, expecting any of the normal pre-teen answers of the 90’s–but my answer was always “The Andrews Sisters,” and I stand by that. I think they’re magnificent. There was just something about how their voices meshed together to create this almost unearthly sound that is just right for the ear, and to me, is exactly what sister groups should sound like.

That said, Always a Bridesmaid is a TERRIBLE MOVIE, and not even the magical trio of Patty, Maxene and Laverne can save it. The plot is entirely non-existent, the script is ridiculous and there were scenes at which I literally cringed due to the corny dialogue or hokey situation the characters found themselves in. I lived for the moments when Patty, Maxene and Laverne would come out and do a number because really, it was a respite from the rest of the film. But no matter how deep my love for The Andrews Sisters, I have to be honest in my opinion that they are meant for radio and records–not the screen. Patty Andrews, the youngest Andrews Sister, is fun to watch (and to listen to, because she has this great scratchy speaking voice that I wouldn’t expect from her), and in one particular scene she proves herself to be a phenomenal dancer. The other two, unfortunately, tend to fade into the background, which is a recurring theme in the career of these three women. Maxene and Laverne are said to have resented Patty for always being the center of attention, the youngest and most talented of the sisters. They fought often, and ultimately broke up after Patty ventured into a career on her own. After performing as a duo with Maxene for several years, LaVerne succumbed to cancer at the age of 55, while Maxene went on to a teaching career. Today, Patty Andrews is the sole surviving sister; at 94, she lives quiet life at her home in Northridge, CA.

The Andrews Sisters sing their most famous song “The Boogie Woogie Bugle Boy of Company B.” 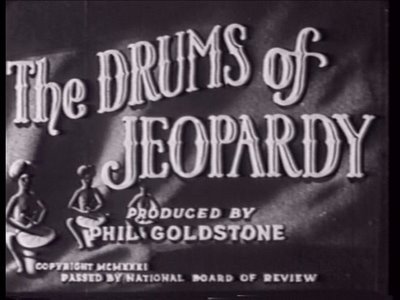 The Drums of Jeopardy, a silent from 1923, was an interesting contrast to Always a Bridesmaid and “Artistry in Rhythm.” This is a story of intrigue and crime revolving around a set of Indian jewels, and the film features a very early appearance of Wallace Beery, who would become famous later as a film star and a radio star.  It is a compelling piece, and despite my extremely tired state by this point, I was drawn toward it and wanted desperately to watch it. Clocking in at a mere 76 minutes, this is a film that truly makes good use of time. The production team used exactly time they needed, not a second less, not a second more. It felt satisfying, as the time was exactly right to tell the story completely.

Now off to bed. More tomorrow!