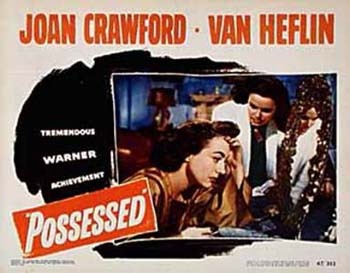 It was Van Heflin day on Summer Under the Stars a few days ago, and I was elated to see that Possessed was on the bill. In the legendary Bette Davis/Joan Crawford rivalry, I have always been partial to Bette Davis, but well aware that my preference for her had much to do with the fact that I was far behind on my Joan Crawford filmography, and I have been trying to make up for that to give Joan Crawford an equal chance. This was a performance that had earned her an Academy Award nomination for Best Actress, two years after her 1945 win for Mildred Pierce, and after having seen the film, I’m not ashamed to say I think she should have won.

The movie is about a woman by the name of Louise Graham whose descent into the realms of mental illness shocks, disturbs and destroys her–and those she loves. Van Heflin plays David, a love she can never have, and Raymond Massey plays her husband who truly loves and is concerned about her, and seems to understand that her illness is real and she is not at fault for what she does while in the throes of what is described as schizophrenia. This is one of the first real analyses of mental illness, and the one of the first films in which the mentally ill are treated as sympathetic, human characters rather than those to be feared.

Joan Crawford gives an absolutely brilliant performance. Take a look at the expression on her face in this particularly telling photo. It is at once sad, diabolical, frustrated–and extremely intense. Crawford lost the Oscar this year to Loretta Young in The Farmer’s Daughter, but it seems that after Mildred Pierce, Crawford’s confidence in her ability as an actress blossomed, and this movie is wonderful evidence of that.

It is interesting to note that the next year, Olivia de Havilland gave a similarly powerhouse performance in The Snake Pit, also dealing starkly and frankly with mental illness. In this film, the idea of Possessed is extended into the realm of the mental institution, and the inherent problems of institutionalization. In the span of a year, two groundbreaking films dealing with mental illness were released, and both actresses nominated for Academy Awards–and both times the actress lost. Olivia de Havilland lost to Jane Wyman in 1948 for Johnny Belinda, and though I have a great fondness for Johnny Belinda, I believe she deserved to win, as Joan Crawford did.

I leave you with the trailer. This is a marvelous film, compelling and beautifully executed in all aspects of its making.