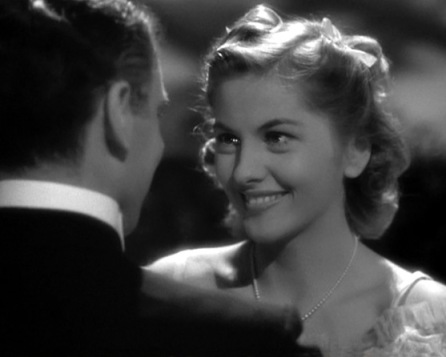 Turning 94 today is the beautiful, multi-talented stage and screen star, Joan Fontaine. One of my personal favorites, Joan now lives in Carmel with her secretary and her dogs, and continues to sign autographs and answer fan mail.

Primarily known as a “Hitchcock actress,” having starred in Rebecca in 1940 and garnering an Oscar nomination for her performance, Joan is the only actor ever to win an Academy Award for a Hitchcock film, for Suspicion, released the following year. She is noted for her striking beauty, and her excellence portraying shy, ingenue characters often abused by their male counterparts, as she did in both Rebecca and Suspicion, and in other noteworthy films such as the comedy classic The Women (1939) and the tragic Letter From an Unknown Woman (1948).

Born Joan de Beauvoir de Havilland  in Tokyo, Japan, Joan was raised with her older sister Olivia de Havilland in Saratoga, CA, in the San Francisco Bay Area (and, incidentally, not too far from where I live). Their English parents separated when the girls were very young, and their mother took them to Saratoga from Japan when it became clear that the climate was not conducive to their health. Joan spent part of her adolescence with her father in Japan and attended the American School in Tokyo, before returning to Saratoga and finishing her schooling at Los Gatos High School.

Sister Olivia left Saratoga for Hollywood shortly after graduating from high school, and Joan followed her after her own graduation. The beginning of her career was bumpy, compared to Olivia’s very smooth road to success in Hollywood, but eventually she began making a name for herself, starring in A Damsel In Distress opposite Fred Astaire in 1937, and The Women in 1939, before hitting the big time with Rebecca, filmed just after her marriage to first husband Brian Aherne. By the following year, Joan had gotten so much attention for Rebecca, that her career was soaring. 1941 saw Joan and Olivia pitted against each other at the Academy Awards, with Joan nominated for Suspicion and Olivia nominated for Hold Back the Dawn. Never having particularly gotten along, the tension between them that night was enormous. However, when Joan won for Suspicion, Olivia was the model big sister, photographed hugging Joan and looking at her with great pride.

From there, Joan’s career grew as she starred in 11 more prominent films throughout the 1940’s, including Jane Eyre (1943), The Constant Nymph (1943, recently remastered beautifully by the Library of Congress), and Letter From an Unknown Woman (1948). Her marriage to Brian Aherne fell apart in 1945 and she married William Dozier in 1946, by whom she had a daughter, Debbie. Later, she adopted a little girl from Peru by the name of Martita with her third husband Collier Young (Martita later ran away from home, a painful incident that Joan recounts in her book, No Bed of Roses).

In the 1950’s, Joan’s career became more stage-oriented. She appeared in Tea and Sympathy  on Broadway in 1954 opposite Anthony Perkins and in the 1960’s she appeared in Private Lives,  Cactus Flower, and a production of Lion In Winter in Vienna, Austria. Though her last film was The Witches in 1966, she continued working on stage and on television through the 1980’s, writing her memoir, No Bed of Roses, in 1978.

No Bed of Roses did not speak kindly of her sister Olivia, and is said to have permanently caused a rift between the two legends. Each sister disapproved of how the other treated the death of their mother in 1975–Joan claims that Olivia didn’t make efforts to contact her on the road, telling her of their mother’s passing. Olivia says she did, but Joan brushed her off. Joan recounted her side of the story in No Bed of Roses, and speaks of her anger and frustration with what she perceives to be her older sister’s lack of consideration. To me, it seems like a simple miscommunication that solidified a decades-old problem between the sisters, and though we can’t know for sure, it seems as though they haven’t had much communication at all since 1975. At ages 95 and 94, it seems unlikely that they will resolve their conflict.

I am a huge fan of both Joan and Olivia, and have had contact with both. I have recounted my story of Olivia here, but last year I wrote to Joan after reading No Bed of Roses, which is a remarkably well-written, elegant book. She is a very, very talented writer, and I wanted to write and tell her so. I wrote a letter telling her how much I enjoyed the book and her films, and she sent me an autographed picture in the mail.

I also have a coat that belonged to her, thanks to a great friend in Norway who collects costumes and is in contact with Joan’s secretary. He had purchased a coat from Joan a while back, and sent it to me as a very generous gift, along with many of her DVDs and some magazine articles.

From what I hear, Joan lives a very happy, comfortable life in Carmel with her 5 rescue dogs, and she is in good health.I send her a card on her birthday (well…I’ve only started it last year, so I’ve done it twice), and this year I found a beautiful Japanese-print card with a dog on the front–perfect for Joan, who loves Japan and loves dogs.