This quick-witted, fast-paced, sassy and fabulous movie is, in my opinion, one of the best movies of that stellar year 1939. Starring two of the reigning queens of MGM, Norma Shearer and Joan Crawford, and directed by George Cukor, the film is comprised of over 130 speaking parts, runs at a whopping 133 minutes, and here is the clincher: nowhere in that 133 minutes is there one single man. All the animals used in the film are female, and the art on the wall features only women. You will not find any evidence of a male anywhere in the film.

The Women was directed by George Cukor, who was known in the industry as being a “woman’s director,” universally loved by actresses and sometimes abhorred by actors for the attention he gave to the women. It is no surprise that The Women would be a tour de force of his, alongside such classics as the 1933 version of Little Women and the 1954 A Star is Born, all films centered on female characters. The direction in The Women is truly magnificent, one of the best things about a film that I think has not a single bad moment in its entirety.

Though there are no men seen in the movie, they are constantly talked about, leading to the very fitting tagline: The Women–It’s All About the Men!  The story centers on Mary Haines (Norma Shearer) who discovers, thanks to her nosy and gossip-crazed cousin Sylvia Fowler (Rosalind Russell) who has been listening to gossip at the salon, that her husband is having an affair with a woman named Crystal Allen (Joan Crawford), a perfume counter worker at Black’s 5th Avenue. It turns out she is the last to know–Sylvia has already told all her friends (specifically Edith Potter, played by Phyllis Povah, and Peggy Day, played by Joan Fontaine), and chaos ensues. Eventually all the girls (except for Edith, a character with about 10 children) end up in Reno for divorces, where they meet a divine multiple-time divorcee by the name of Countess de Lahve (Mary Boland), and Sylvia meets Miriam Aarons (Paulette Goddard), the woman with whom her husband is having an affair.

The result of the meeting is an absolutely hilarious catfight scene.

After a series of events, the girls end up back with their husbands. We find out that after marrying Stephen Haines, Crystal Allen has begun an affair  Buck Winston, the husband of the Countess de Lahve, leaving Stephen free to get back together with Mary. Mary hears the news from her daughter, and uses Sylvia’s gossipy personality to her advantage in worming confirmation of the affair out of her. The Countess tells Crystal that she has been supporting Buck’s radio program and Buck will be penniless without her. Crystal resigns herself to Reno herself, and tells the ladies:

“Well girls, looks like it’s back to the perfume counter for me. And by the way, there’s a name for you ladies…but it isn’t used in high society…outside of a kennel. So long, ladies!”

The film ends with Mary running into the arms of Stephen, who of course is off-camera.

The plot is multi-layered and complex, as you can well see. All the performances are brilliant, and as I said, I don’t think there is one bad scene in the entire film. One of my favorite bits is a Technicolor fashion show in the middle of the movie–not only was this advanced technology for 1939, but also showcases some of the absolutely stunning fashion of the day. 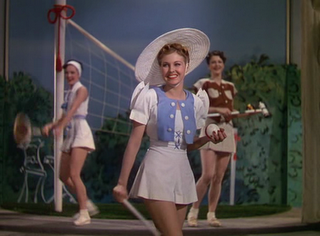 Although the vast majority of the movie is, of course, in black and white, color is a recurring theme. In addition to the fashion show, the fashionable nail color that all the girls get from the manicurist is known as “Jungle Red.” The color becomes a symbol of just who has what information, and at the end, “Jungle Red” transforms into a symbol of power. When Mary goes to win Stephen back, she says to her mother:

This is also in direct correlation, I think, to the tagline of the movie. So much is below the surface, which leads the viewer to read into it himself, making for a truly entertaining movie experience.

Here are some clips. Enjoy!

10 responses to “MOVIE REVIEW: The Women”