STAR OF THE WEEK: Lucille Ball 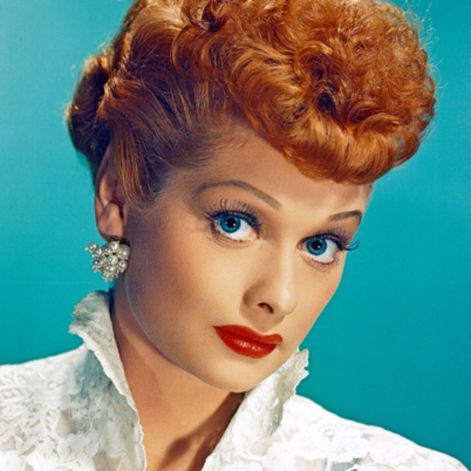 August 6 marks what would have been the 100th birthday of one of the foremost entertainers of the 20th century. A legend’s legend, her mark on the industry has been one of extraordinary importance. She came to be not only the face of the 1950’s and the icon for the emergence of television, but also a groundbreaker for women in comedy and in the business of entertainment production.

It would be too easy for me to talk about Lucille Ball’s contribution to comedy. Everybody already knows about “I Love Lucy” and the impact it has had on popular culture. Everybody knows what a comedic genius she was. I don’t need to bore you with that information–it is so embedded in our society that one can hardly turn on the TV without somehow being reminded of Lucy’s mark on the industry. What I want to focus on is her early and later work, that which is not so well-known and which deserves to be paid more attention to. Young Lucille Ball does not remind me of the dizzy Lucy Ricardo that we all know and love, but rather a smart, wisecracking dame–not unlike the characters Eve Arden played so brilliantly. She had a good bit of fame and popularity during her tenure at MGM, but of course that is all obscured now by her smashing success on “I Love Lucy.”

Lucille Desirée Ball was born in Jamestown, New York on August 6, 1911. Her father, Henry, died when she was 3, and Lucy claimed later in life that she always tried to be a clown, to fill the void that her father had left in her childhood. When her mother, Deedee, married again, it was to a man who was a member of the Freemasonry, and who at one point needed chorus girls for a show at his organization. 12-year-old Lucy auditioned and got the job. So began the career of Lucille Ball.

By the age of 16, Lucy was already on her way to being a legitimate performer. She attended the John Murray Anderson School of Dramatic Art in New York City, and subsequently became a fashion model. Her modeling work led to a job on Broadway, and despite a rocky start, she headed to Los Angeles and managed to get herself some B pictures and uncredited roles at MGM. She soon became known as “Queen of the B’s.”

By the late 1930’s, Lucy was beginning to become a name in Hollywood. She co-starred with Katharine Hepburn and Ginger Rogers in the 1937 hit Stage Door, and also began a radio career that gained her further exposure. By 1940 she was costarring with Maureen O’Hara in a film entitled Dance, Girl, Dance, which showcased not only her tremendous acting talent, but also her ability as a dancer and entertainer.

The film led her to another milestone in her life. Maureen O’Hara writes in her book, ‘Tis Herself:

“While we were in line getting lunch, Lucille started complaining about her next movie, a musical called Too Many Girls. She was worried about it because her new leading man was a younger actor who had never been in front of a movie camera. She called him ‘That Cuban–Desi Arnaz.’….Just as I was telling her how talented and gorgeous he was, Desi walked into the commissary with his agent, Doc Bender. I whispered to Lucille ‘But don’t take my word for it. See for yourself.’ Lucille followed my eyes and I could almost hear the bells ringing in her head. The first words Lucille uttered when seeing Desi for the first time were ‘Oh my God.’ It was love at first sight for her.”

Lucy and Desi Arnaz married in 1940, and in 1948, Lucy was cast as the wacky wife in a radio series known as “My Favorite Husband.” Noting the newly emerging television medium, Lucy and Desi expressed interest in adapting the series for television. After a good deal of skepticism on the part of network executives, Lucy and Desi formed Desilu, their own production company, to launch their efforts in 1950.”I Love Lucy” finally premiered on October 15, 1951.

I read a ratings study once that said that when”I Love Lucy”was on TV, so many people were glued to their television screens that the levels on the water towers all across the country essentially didn’t move. As soon as the commercial came on, those levels suddenly plummeted. When Lucy Ricardo was scheduled to have her baby on the show, ratings for that episode outshone the ratings of the Eisenhower inauguration, scheduled at the same time. Such was the impact of “I Love Lucy.” It broke barriers in all arenas of the entertainment industry–both social and technical. Lucille Ball became the first head of a production studio, Desi Arnaz was the first on network television to utilize the “three camera method” used for innovative shooting, and, perhaps most notably, Lucy and Ricky became television’s first interracial couple. Despite dominating the ratings for 6 years, the Ball/Arnaz marriage suffered throughout the series, and tensions between them led to the show’s deterioration. “I Love Lucy” saw its last episode on May 6, 1957, and following a short series entitled “The Lucy/Desi Comedy Hour,” Lucy and Desi divorced.

Following her divorce from Desi Arnaz in 1960, Lucy embarked on a new project, “The Lucy Show,” centering around Lucy Carmichael, a character who appears to be a sort of liberated Lucy Ricardo. The show ran from 1962-1968.

Lucille Ball was known for her generosity as a performer. Here she acts with rising comedy star Carol Burnett, who plays Lucy Carmichael’s new roommate. Look how Lucy completely steps away from the spotlight, allowing Carol to take the stage and essentially take the crown as the reigning female comedic legend. Many stars have remarked on this quality, including Barbara Eden, who as a young starlet had a guest spot on “I Love Lucy.”. She writes in her book, Jeannie Out of the Bottle, that she recalls Lucy personally glamorizing the dress Eden was given to wear in the show, because she felt it wasn’t good enough for her. In all the books I’ve read, Lucy is described as being a stellar professional, always willing to put her costar first. In the years that followed “The Lucy Show” and until her death, Lucy and Carol Burnett remained very close friends.

By the 1970’s, Lucy’s health began to decline. A lifelong smoker, she developed a deep smoker’s voice that was difficult to ignore. She made a movie version of the musical Mame in 1974, but the film was panned by critics. It has now become a bit of a cult classic, and to its credit Lucy’s costar is the magnificent Bea Arthur, who had come from a Tony-winning turn in the Broadway production of Mame with Angela Lansbury.

In her last years, Lucy withdrew from public life. Her last film was a made for TV movie entitled Stone Pillow, in 1985. In 1989 she appeared at the 61st annual Academy Awards, and received a standing ovation from the members of the Academy. It was to be her last television appearance–she passed away from heart failure less than a month later.

It really is difficult to sum up exactly what Lucille Ball means to the cultural scene today. She is everywhere–from “I Love Lucy” lunchboxes to the reruns of the show in syndication, to the showings of her movies on TCM to the Lucille Ball drag queens in New York and San Francisco. She is truly woven into our culture, and I think it’s a shame that the Lucy people know is often her character Lucy Ricardo, and not the smart, wisecracking sidekick of Stage Door or Dance, Girl, Dance, or the generous performer that so many of her costars remember her to be. There was so much more to Lucy than Lucy.

I leave you with one of my all-time favorite Lucy moments, one of her three appearances on “What’s My Line.”

This entry was posted in Stars of the Week. Bookmark the permalink.

7 responses to “STAR OF THE WEEK: Lucille Ball”