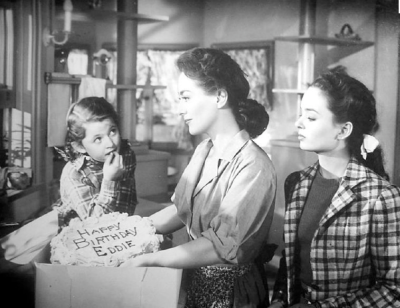 Last night I went to see “Mildred Pierce” at the Castro Theatre with Tony, a good friend of mine and fellow classic film lover. I had seen it on the big screen when I was in Paris, but it’s always so much fun to watch it with a huge crowd–especially at the Castro! One thing that really jumps out at me when I watch it on the big screen is just how spectacular the visuals are–the cinematography, the lighting, and the costumes. My friend Tony is a true fashion aficionado, he can tell you who made what outfit, what costume designer was at which studio during what time period, and who influenced whom in the fashion world. When I remarked on the beauty of the costumes in the middle of the movie and asked him who was the designer, I was surprised to hear that it was not a known name.

By way of a quick google search, I found out that the costume designer was named Milo Anderson, a Warner Brothers resident designer who also worked on such movies as The Adventures of Robin Hood and To Have and Have Not. Clearly he deserves more credit than he receives–the costumes in all these movies are spectacular.

The first costume that caught my eye was this one–the sort of default outfit for Mildred. She wears it during her interview at the detective’s office and at the very end of her flashback sequence, so throughout the movie we associate Mildred with this outfit. This is a medium-length fur coat with a matching hat, and a dress whose color (we can’t really tell, but I’m guessing maybe brown?) is matched by her gloves. I am not a fan of fur at all, in fact I’m very much set against it, but Joan Crawford wore a lot of it in this movie and it suits her character.

Veda first appears in this beautiful white shimmering gown with a large white flower in her hair. The color white I think is meant to be a trick on the audience–we assume she can’t have anything to do with the murder that just took place, because she’s wearing these innocent, virginal colors, and wearing them very well. Though this is not my favorite Veda outfit from the movie (the huge flower always makes me think of Billie Holiday for some reason), it is nonetheless a beautiful creation. I think it actually might be the hair that makes it work. Look at those beautiful ringlets. 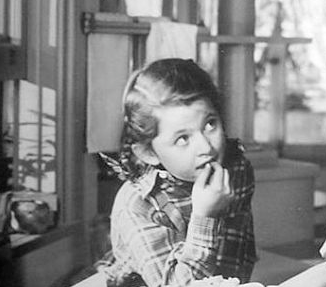 The starkest contrast in this movie is Veda’s younger sister Kay, a tomboy who is forced into ballet lessons when she would rather play football and get dirty. Her costume here really shows her character, and not only her character, but also the versatility of the designer. Among all these beautiful dresses, here he is unafraid to make the little girl look like a total hillbilly.

Here is my favorite Veda costume. Look how EVERYTHING matches color-wise, and how she’s using those accessories–I’m loving that pin, and the collar, and never even mind about that glorious hat. I basically want this outfit.

Eve Arden is one of my all-time favorite character actresses, and here she is dressed up in this bizarre Hawaiian number that seems almost anachronistic. It oddly suits her character though, and when she came on the screen wearing it, the fashion-conscious Castro crowd all started murmuring to themselves about it!

Here are some more brilliant fashion moments from the movie: 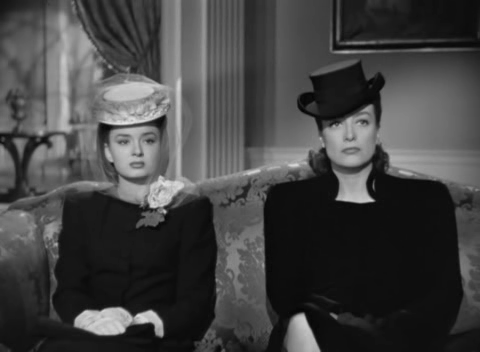