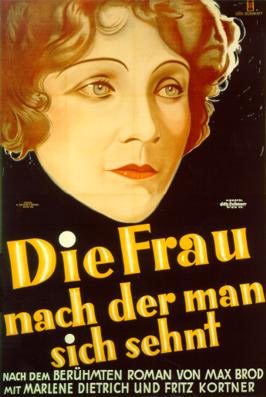 Last night I went to the Castro Theatre to see “Die Frau, nach der man sich sehnt” (A Woman Men Yearn For), part of the San Francisco Silent Film Festival that started on Thursday and is going on through tonight. Due to lack of finances, I have not been able to attend until now, but I’m glad that such a quality film was my first taste of this year’s film showings. The Castro boasts many festivals, including this one, the Jewish Film Festival, and the LGBT Film Festival, among others. This was my first experience at the Silent Film Festival, as the tickets are often so expensive that I have to pass them up due to inability to pay. This particular movie cost $17, for example. Steep, but I was willing to pay it for the opportunity to see this early Marlene Dietrich film, which proved to be a real beauty.

I love Marlene Dietrich. I find her to be on par with Garbo as one of the most mysterious and ethereally beautiful women ever to grace the screen. Though Marlene was not classically pretty, she knew how to work the lighting to her advantage, keeping her head at such an angle as to minimize the visibility of her turned-up nose and accentuate her more positive features. In my opinion, her large, expressive eyes are the most stunning part of her. She can say everything with a glance, and in most of her movies she drives men wild with desire just by giving them that glance. In this movie, Marlene is a woman with a secret–she and her lover, Dr. Karoff, are on a train escaping a crime they have committed, when Marlene’s character, Stascha, meets another man on the train, Henri. This man is on a honeymoon with his wife, whom he married to save the family business. He doesn’t particularly love her, though she seems to be a sweet person who loves him a great deal. Henri first catches a glimpse of Stascha through a train window covered in frost.

This is an absolutely beautiful scene. Not only is it the first time we see Marlene Dietrich in the film, but as we gaze at her, the frost on the window begins to slowly melt away. It is as if she is giving off some kind of intense heat, and though her face reflects an air of tragedy, we can see that in her own way, this woman is powerful. Henri is immediately smitten, and can’t take his eyes off her. Eventually they meet in the train, and Henri is putty in her hands. We see him basically clamor to her, rushing over to her to light her cigarette and generally being completely in awe of her. Stascha begs him to help her get away from her lover, and when Dr. Karoff discovers them, Stascha claims that Henri is her cousin. It becomes clear that there is a problem between them, but Dr. Karoff pulls Stascha off the train at the next stop, and Henri is left with his feelings of lust for her. It becomes too much for him to take, and he jumps off the train to follow her, forsaking his wife who is left in their train compartment heartbroken and crying.

Henri is captivated by Stascha.

You really feel for the wife in this movie. It is clear that she is a sweet woman who loves her husband dearly, she is affectionate and loving toward him and just seems like a wonderful girl. When he leaves her in the train, the audience’s heart just breaks for her, and yet understands why this man, acting on his lust and primitive instincts, might do such a terrible thing as to suddenly leave his wife like that. We never do learn what happens to the wife, she sort of disappears from the movie after that scene.

Stascha does everything in her power to keep seeing Henri, but Dr. Karoff is on to them. It is in this scene that we learn their secret–they have killed a man, and the police are on their tail. Stascha and Henri fall completely in love, and at one point Henri and Dr. Karoff get into a knock-down, all-out fight over Stascha. At the end of the movie, the police find them, and Stascha finally tells Henri the secret. The audience learns that not only have they killed a man, but the man was Stascha’s husband, and Stascha went along with the murder. The film ends with the police accosting them, and at the last minute, Dr. Karoff commits another murder. I won’t tell you who it is.

There is one beautiful scene, in which all three lead characters are at a New Year’s Eve party, that I think is masterfully executed. The cinematography is brilliant, with lots of very long shots (one in particular that lasts for about 1 minute) and closeups of Dietrich’s tragic expression, juxtaposed with the joy of the party. It is the cinematography of this movie that is really its saving grace, as the plot is kind of hard to follow. The fact that there are very few title cards is both compelling and confusing–nearly everything is said through the expressions of the actors, and while it makes for a beautiful piece of artistry, the plot suffers. There are a few shots that really stuck out to me, in addition to the New Year’s Eve party, there is a shot at the beginning of the inside of a steel-making machine, and the camera is positioned in such a way that it looks as though the hammer inside the machine is coming right toward the audience. A great use of the camera, and pretty advanced for 1929, I say.

I would definitely see this movie for its beauty. Not only the beauty of the camerawork and cinematography, but also of the actors. Everyone is stunning–even Dr. Karoff, who is technically the villain, has a certain charm about him. I think he looks very much like Laurence Olivier circa 1957. You may have trouble following the plot, but eventually everything becomes pretty clear. I had an enjoyable experience.

Tonight I’m going back to see He Who Gets Slapped, starring Norma Shearer, John Gilbert, and Lon Chaney. This one should be great.