A zany comedy with a script that is so absurd it’s almost surreal, “My Man Godfrey” is one of the films that I think deserves more credit outside the classic film community than it gets. A showcase of the very different comic styles of both Carole Lombard and William Powell, it is, I think, one of the more advanced comedies to come out of the 1930’s.

The story deals with a high society girl, Irene, who plucks a homeless man out of the ash pile to bring to a “scavenger hunt” at a high society party. See what I mean about absurd? The scavenger hunt had as its last requirement the finding of a “forgotten man,” and bringing him to the party, so this girl went down to the ash pile next to the Brooklyn Bridge and found a homeless man.

She wins the prize, much to the chagrin of her sister, who had tried to coerce the homeless man into coming with her first. Irene feels grateful to the homeless man, whose name we have learned is Godfrey, for helping her win the coveted prize, and as thanks, she offers him the position of butler in their house. Neither the sister nor the mother (who is truly nutty, and who had, by the way, had found a goat the scavenger hunt…) approves. He is hired nonetheless by Irene, and begins his work the next morning.

We learn straight away that this family is even more nutty than it seems. The mother has a protégé by the name of Carlo who eats too much and is a drama queen, the mother herself has a tendency to see pixies when she is hungover (which is often), Irene is prone to fake fainting spells when she doesn’t get her way (which Carlo attempts to quell by acting like a gorilla to make her laugh), the older sister is a spoiled brat and the father is on the brink of bankruptcy and bitter about how insane his family is. Godfrey is the only butler who has stayed more than a short period of time, and the father wonders why he decides to stay. His ability to stay with the family makes him suspicious of his actual identity. Irene, naturally, falls in love with him, and this only complicates things for Godfrey.

In fact, we learn that Godfrey is not a homeless man by necessity, but rather by choice. He came from a prominent Boston family, and embittered by society life, he admired the men who lived on nothing and decided to become one of them. The family does not know this, and he does not tell them. That is, until the end, after a series of mishaps ensue (namely the disappearance of the brat sister’s pearl necklace) and…well, I won’t tell you the end. 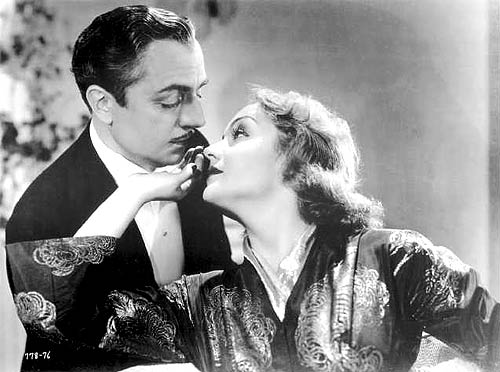 Carole Lombard is perfect in the role of Irene, with her sweet, eccentric humor, and William Powell plays the straight man very well with most of his humor being in his physical presence. There is one scene where he is simply walking up the stairs, and it is funny as can be. The mother, played by Alice Brady, however, may steal the show away from both of them. Her nuttiness is pretty much the comic center of the movie. Although Alice Brady is perfect, if I were to recast the film with other actors fitting the roles perfectly, I would cast Billie Burke as the mother.

“My Man Godfrey” is brilliantly well-written, on a number of levels. On one level, it is full of zingers and one-liners, many of which are delivered so quickly that it takes a moment to realize what was just said. One of my favorites, between Godfrey and the maid:

GODFREY: May I be frank?

MAID: Is that your name?

As I mentioned earlier, another aspect of the script is its complete and unapologetic absurdity. When Irene has one of her fake fainting spells, Godfrey puts her in the shower and turns the cold water on to teach her a lesson, and Irene takes this to mean that Godfrey is in love with her. The mother says nothing but things that don’t make any sense, and her reactions to anything negative have to do with how they’re affecting Carlo. Toward the end of the movie, the father finally has enough of Carlo and throws him out the window. If this movie has a fault, it’s that it may be TOO absurd for many people. My personal taste says that nothing is too absurd, but it’s just way over the top and surreal.

The film also ends in a very strange way, leaving the viewer almost feeling like something was intended to be there but never made the final cut. When the film ended the first time I watched it I was very confused–is it really over? It leaves one expecting something more.

My Man Godfrey is not VERY widely available, but you should be able to find it on Netflix. They recently colorized it, and don’t get that version if you can avoid it. The original black and white is always the best option.

This entry was posted in Movie Reviews. Bookmark the permalink.